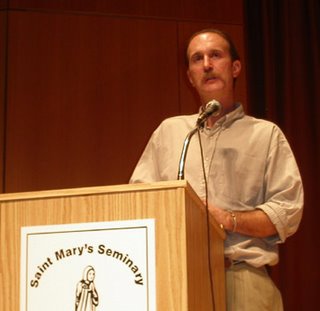 
In April 2002 Ray Krone became the 100th innocent person released from prison after having been sentenced to death. Ray spent ten years in prison, including two years on Arizona’s death row, for the murder of a female bartender.

He was freed when DNA testing proved he was not the killer and identified a man serving a sentence for an unrelated crime as the murderer. Ray believes in the U.S. system of justice but feels the death penalty system is broken.

On April 19, 1995, Bud Welch’s 23-year old daughter, Julie, and 167 others were killed in the bomb blast that destroyed the Alfred P. Murrah building in Oklahoma City.

Bud had always opposed the death penalty but Julie’s death prompted bouts of anger, pain, hatred and revenge. He longed to see Timothy McVeigh (who was eventually tried and convicted of the bombing and executed) dead.

After months of agony Bud began to question his desire for revenge. He realized that nothing positive would arise from McVeigh’s execution. “It was hatred and revenge that made me want to see him dead and those two things were the very reason that Julie and 167 others were dead,” he says. He also remembered Julie’s comments that executions were only “teaching children to hate.”

Bud spent the next several years speaking out against the death penalty in general and McVeigh’s execution in particular. He met Bill McVeigh, Tim’s father, and the two formed a friendship that is being documented in an upcoming film.

As an ardent abolitionist he has addressed the Russian Duma, the British and the European Parliaments, and universities and groups across Europe. He has testified twice before the U.S. House Judiciary Committee, once in opposition to the habeas corpus reforms that were being proposed and later passed as part of the Anti-Terrorism and Effective Death Penalty Act.

He has testified before 22 state legislative bodies including the Illinois house judiciary committee on that state’s death penalty moratorium bill. His speeches at scores of universities and law schools center on his hard-won stance against the death penalty. He is a board member of the National Coalition Against the Death Penalty. He was a member of the Board of Directors of the Oklahoma City National Memorial Foundation and met with President Clinton at the White House to present the plans for the national memorial.

He has been interviewed with Larry King and Bill Moyers and appeared on “Good Morning America,” the “Today Show,” CBS’s “60 Minutes” and “Dateline NBC.” He has written pieces for both Time and Newsweek. Profiles of Bud have appeared in numerous magazines including Guideposts and Parade.

Bud received the “Abolitionist of the Year” award from the National Coalition to Abolish the Death Penalty. He also received of the “Abolitionist of the Year Award” in 1998 from the Oklahoma Coalition to Abolish the Death Penalty; the “Felton Humanitarian Award” from Death Penalty Focus; the “Spirit of Compassion” award of the Prison Action Committee in Buffalo, New York; and the ACLU Oklahoma Foundation “Anti-Death penalty/Prison Project Award.” He is also the recipient of the "2003 Reconciliation Award" from California People of Faith Working Against the Death Penalty; the "Frederick Douglass Equal Justice Award" from the Southern Center for Human Rights in 2001; the "2001 Abolitionist of the Year Award" from Coloradoans Against the Death Penalty; the "Golden K" of the Kiwanis Club in Decatur, IL in 2002; and he was presented with the Key to the City of Buffalo, NY in 1998 by Mayor Anthony Masiello. He has participated in the “Journey of Hope” and many other anti-death penalty activities and organizations.

Oklahoma City Bombing: Two Fathers and Forgiveness
Dad finds solace in mercy, not revenge
Journey Toward Forgiveness Video
A Campaign for Forgiveness Research
A Long Healing Process
Revenge and Hate is what Resulted in the Death of 167 People
The Death Penalty and the Catholic Church
Florida Moratorium Tour: Journey of Hope
Choosing Forgiveness – from Opposite Places
Hero Award

"I was opposed to the death penalty all my life until my daughter Julie Marie was killed in the Oklahoma City bombing. For many months after the bombing I could have killed Timothy McVeigh myself. Temporary insanity is real, and I have lived it. You can’t think of enough adjectives to describe the rage, revenge, and hate I felt. But after time, I was able to examine my conscience, and I realized that if McVeigh is put to death, it won’t help me in the healing process. People talk about executions bringing closure. But how can there be closure when my little girl is never coming back. I finally realized that the death penalty is all about revenge and hate, and revenge and hate are why Julie Marie and 167 others are dead."

The latest in our installment of the Tuesday's Focus series looks at the story of Jennifer Bishop-Jenkins. In addition to being involved with The Journey of Hope...From Violence to Healing, Jennifer serves on the Board of Directors both for the National Coalition to Abolish the Death Penalty and for our affiliate, Murder Victims' Families for Human Rights.

Jennifer Bishop-Jenkins’ sister Nancy Bishop Langert was shot to death along with her husband, Richard Langert, and their unborn child in suburban Chicago in 1990. Their killer was 16 years old at the time and a local politician running for re-election proposed lowering the age of death penalty eligibility in Illinois to 16 to “honor your sister.”

Jennifer vowed to oppose him publicly if her sister’s murder was used as the rationale for this proposal. “Nancy loved children and this is not what she would have wanted,” she says. Since that time she has worked to end the death penalty both in Illinois and nationwide.

She has testified before the Illinois Governor’s Commission on Capital Punishment and in death penalty clemency hearings before the Illinois Prisoner Review Board. She has spoken before state legislative committees and the Chicago City Council on issues of gun violence, crime prevention, and criminal justice reform.

She appeared in the documentary on the death penalty, “Too Flawed To Fix” and was profiled in a Chicago Tribune Magazine cover story. Her story and abolition work are included in the book Don’t Kill In Our Names by Rachel King. Jennifer, who first visited Illinois’ death row in 1994, is on a mercy committee for former death row inmate Renaldo Hudson. She wrote the foreword for the recently published book of prisoners’ essays on personal responsibility and transformation entitled Lockdown Prison Heart.

Jennifer and her sister, Jeanne Bishop, were co-recipients of the Brigid Award given by Concern Worldwide in recognition of their reconciliation work. She has taught high school and college for more than 20 years and has received several outstanding teacher awards. She is the Field Director for the Brady Campaign to Prevent Gun Violence for Illinois and Minnesota.

"Our sister Nancy and her husband Richard were a young couple expecting their first child when they were shot to death in their home. They loved and valued life; our sister was carrying life within her when she died a terrifying and brutal death. Her last act as she was dying was to write a message of love in her blood. We can’t imagine making the death of another human being her memorial."
Posted by Unknown at 11:02 AM 2 comments:

The continuing Tuesday's Focus series today looks at the story of Renny Cushing:

Renny Cushing is the founder and Executive Director of Murder Victims’ Families for Human Rights. His father’s murder in 1988 has shaped his work as an advocate for crime victims and as an opponent of capital punishment.

As a victim-abolitionist Renny has been a pioneer in the effort to bridge death penalty abolition groups and the victims’ rights movement. He travels throughout the U.S. and the world speaking with and on behalf of victims who oppose capital punishment.

He has testified before the U.S. Congress and several state legislatures on victims’ issues and the death penalty, articulating policies that promote violence prevention, meet the needs of crime victims, and end state killings. He has written and lectured extensively and is the co-author of Dignity Denied: The Experience of Murder Victims' Family Members Who Oppose the Death Penalty, and I Don’t Want Another Kid to Die, a collection of homicide family members' voices against the juvenile death penalty. He also appears, along with many other MVFHR founding members, in Not In Our Name, a collection of profiles of murder victims’ families who oppose executions.

A lifelong social justice activist, Renny has been a Justice of the Peace for the past 25 years. He served two terms in the New Hampshire House of Representatives, where he was involved in victims’ issues and sponsored a measure that would have abolished the death penalty in that state. Renny wrote the Whistleblower’s Protection Act, a groundbreaking law providing assistance to victims of domestic violence. He also supported the passage of laws establishing a victims’ bill of rights, victims’ advocate programs, and a victims’ compensation fund. In 2001, as plaintiff in Cushing v. McLaughlin, he was successful in a landmark state court case brought to enforce New Hampshire’s Victims Bill of Rights law.

Links to Renny’s Journey
Breaking the Cycle of Violence from Amnesty Now, 1999
Forgiving the Unforgivable, the story of the murder of Robert Cushing, Sr.
Not in Our Name, homicide survivors Renny Cushing and Bud Welch speak out against the death penalty at Harvard University, 1999
Statement of Renny Cushing Central Prison Raleigh, North Carolina December 1, 2005 Eve of the 1000th Execution in the US since 1976
The Good Fight
Renny Cushing to Visit Alaska in March
Poster Boy For Abolition – McVeigh

Renny Cushing Quotes:
"A man come up to me after my father was murdered and said, "I hope they fry those people. I hope they fry them so you and your family can get some peace." I know that man meant to comfort me, but it was the most horrible thing he could possibly have said.
If we let murderers turn us to murder, we give them too much power. They succeed in bringing us to their way of thinking and acting, and we become what we say we abhor."
Posted by Unknown at 12:39 PM No comments:

With apologies for being a day late, we bring you the latest Tuesday's Focus. Today we examine the story of Christina Lawson.

Christina Lawson was nine years old when her father was murdered on a jogging trail. She experienced pain, anger, loneliness, and hatred towards his killers.

She was twenty when her husband was sentenced to death for the murder of a twenty four year old woman, on a jogging trail.

On that day, looking at the victim’s family members she recognized their pain. She saw herself. She realized that when her father was murdered, so was she. She began her journey towards reconciliation.

When asked what she does now, she replies “I am surviving the cycle.”
Links to Christina’s Journey:
Victims of Texas: Supporting the Forgotten Survivors (VOT)
MtvU wants to turn Spring Breakers into action-makers
Journey of Hope -- Interview of Christina Lawson
13TH Annual Fast and Vigil
Alternative Spring Break
Bring Friends who are Ambivalent About the Death Penalty
Posted by Unknown at 6:43 AM 2 comments: