From Murder to Forgiveness 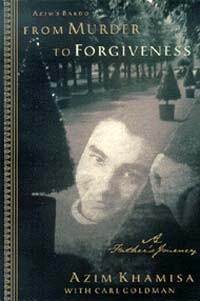 The Book by the Dad of the Victim -- Azim Khamisa:  A compelling true story of a father's journey from the initial shock of the loss of his son to forgiving the murderer who took his son's life. A journey that will take you from anger to forgiveness, peace and wisdom. A must read for all.

Article/Summary of this healing story:
Could You Forgive Someone Who Murdered Your Only Son?
By Claudia Ricca: English and Journalism, University at Albany-SUNY
Originally Posted: 10/02/2012 11:37 am
Seventeen years ago, investment banker Azim Khamisa was 46 years old and leading a pretty ordinary life. He had a good career, two children, and he enjoyed the sunny climate living in beautiful La Jolla, California.

That all changed on a night in 1995 when his only son, Tariq, 20, met with disaster as he attempted to deliver a pizza as part of his job.

A 14-year-old thug, part of a gang out looking for trouble, shot and killed Tariq as he sat in his car.

Khamisa fell into such an intense and agonizing despair that at one point, he was suicidal.

But Khamisa didn't die. In fact, he found himself after much soul-searching, doing something that most people would consider impossible. He reached out to the family of the young shooter, who was tried and convicted as an adult. Khamisa offered forgiveness and compassion to the family grieving on the other side.

"I talked to the boy's grandfather, who was his guardian, and I said, 'we've both lost our sons, my son to murder, and yours to prison.'"

Khamisa decided to set up a foundation in his son's name -- the Tariq Khamisa Foundation -- and he went on to dedicate his life's work to fostering forgiveness. He has since spoken before millions of people internationally and closer to home, in public and corporate workshops, and in video and audio recordings. He also has published four books exploring the way in which his heart-wrenching tragedy transformed him and led to his forgiveness work.

He realizes that many people will be puzzled by his decision to forgive his son's shooter (whose name is Tony.) "Forgiveness is not well understood in our culture," Khamisa says. "But I have a better life because I forgived. I came to realize that resentment is very corrosive. If you're out there carrying resentment, you're not going to be living at 100 percent of your capacity."

Khamisa also was able to see that Tony faced a life of agony and pain because of his crime. There were "victims at both ends of the gun," Khamisa says. "Tony has to live the rest of his life knowing he killed an innocent, unarmed kid. There's no escaping his wrongdoing. He still gets nightmares over the murder."

Key to Khamisa's transformation was his lifelong practice of meditation, and his ability to see that the only way he would ever have peace in his life is if he let go of the hatred and resentment he was initially harboring toward Tony. Today, Khamisa often appears on stage with Tony's grandfather; they speak to school groups talking about the pointless tragedies of gang violence, and in so doing, the two men are promoting peace.

To learn more about Azim and his amazing work, visit his website, www.azimkhamisa.com, where you can download his guided mediations on forgiveness.
Posted by CN at 12:12 PM 4 comments: