The latest installment of our continuing Tuesday's Focus series examines the journey of Ruth Andrews:


Ruth Andrews is an ethnic Mennonite. She has always believed the death penalty is immoral.
Ruth’s mother's murder (when she was 16) didn't change that, although it changed everything else. Since the crime was never solved, Ruth couldn't take her anger out on anyone. Instead, she took it out on herself. For the next ten years she lived recklessly and was dangerously self-destructive. It wasn't until Ruth became pregnant that she began to care for herself again.

Another turning point in her healing occurred at a conference on forgiveness, when Ruth asked a murderer to pray for her. On the Journey of Hope in Georgia in 1994, Ruth was paired with a woman who had a son on death row, “The similarities in our experiences were remarkable. I felt closer to her than to the "good" people I'd known all my life. I'm very grateful to belong to the Journey of Hope.“

Today, as the latest in our Tuesday's Focus installment we bring you the story of Rev. Walt Everett of Connecticut:

In 1987 Walt Everett’s son, Scott, was shot and killed at the age of 24. For almost a year afterwards, Walt’s emotional state moved from rage to depression. He found it difficult to even go through the motions of his work as pastor of a United Methodist Church.

It was only at the sentencing when he heard Mike Carlucci express remorse for killing Scott that Walt felt God nudging him towards forgiveness. Walt describes this journey as the most difficult thing he has ever had to do.

He wrote to Mike on the first anniversary of Scott’s death. Thus began a correspondence, which led to visits and finally to Walt’s testifying on Mike’s behalf at a parole hearing. Based on this testimony, Mike obtained an early release and went to work for a trucking firm where his boss described him as “the best supervisor I ever had.”

Walt and Mike often speak together at universities, churches and community groups about the healing power of forgiveness, healing for both the forgiven and forgiver.

Walt is a pastor of United Methodist Church of Hartford, Connecticut. He met his wife at a bereavement group and between them they have six children, four of whom are still living, and eight grandchildren.

Walt is an ardent advocate of the anti-death penalty movement and is active in numerous abolition and restorative justice organizations. His story has been told in numerous publications including an extensive profile in Rolling Stone.

Father Forgives the Man Who Murdered His Son
The Transformative Power of Forgiveness
The Mercy Minute: Unconditional Love
Yesterday, I drove Walt Everett and his wife Nancy to an event at a Catholic church in McKinney, Texas.
Sermon: One Hand Clapping
State Counts Down to Killers Death
Speakers on Capital Punishment audio file
Posted by Unknown at 1:45 PM No comments:

Shujaa Graham was born in Lake Providence, LA, where he grew up on a plantation. His family worked as share-croppers, in the segregated South of the 50s. In 1961, he moved to join his family who had moved to South Central Los Angeles, to try to build a more stable life. As a teenager, Shujaa lived through the Watts riot and experienced the police occupation of his community. In and out of trouble, he spent much of his adolescent life in juvenile institutions, until at age 18, he was sent to Soledad Prison.

Within the prison walls, Shujaa came of age, mentored by the leadership of the Black Prison movement. Shujaa taught himself to read and write, he studied history and world affairs, and became a leader of the growing movement within the California prison system, as the Black Panther Party expanded in the community.

In 1973, Shujaa was framed in the murder of a prison guard at the Deul Vocational Institute, Stockton, California. As a recognized leader within and without the prison, the community became involved in his defense, and supported him through 4 trials. Shujaa and his co-defendant, Eugene Allen, were sent to San Quentin's death row in 1976, after a second trial in San Francisco. The DA systematically excluded all African American jurors, and in 1979, the California Supreme Court overturned the death conviction.

After spending three years on death row, Shujaa and Eugene Allen, continued to fight for their innocence. A third trial ended in a hung jury, and after a fourth trial, they were found innocent. As Shujaa often says, he won his freedom and affirmed his innocence in spite of the system.
Shujaa was released in March, 1981, and continued to organize in the Bay area, building community support for the prison movement, as well as protest in the neighborhoods against police brutality.

In the following years, Shujaa moved away from the Bay area. Shujaa learned landscaping, and created his own business. He and his wife raised three children, and became part of a progressive community in Maryland.

In 1999, Shujaa was invited to speak about his experiences on Death Row at fund raiser for the Alabama Death Penalty project, sponsored by the New York Legal Aid Foundation. This was a new beginning, and provided Shujaa the opportunity to begin to tell his story, his experiences and grow through work with other death penalty opponents.

"I was framed because of my beliefs and because I was outspoken about prison conditions."

"We need a government that would be so sensitive to the needs of the people that its every endeavor would be towards building peace and happiness and not preying on the misery of people. And that’s really how the death penalty goes--it preys upon people’s fears"

"I've tried to integrate the prison issue with other movements. My politics go far beyond prison itself, but because I’ve been in prison, I felt a responsibility to try to expose the conditions of prison life, to fight against new prisons, to address how the disenfranchised will be tomorrow’s victims of the prison system.

“I stand here wounded by the blows of the death penalty of racism, trying to end this awful reality”
Posted by Unknown at 2:08 PM 1 comment: 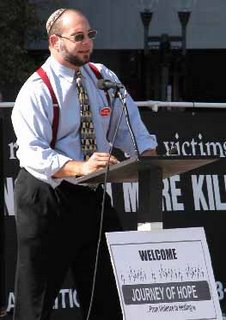 (blogger's note: the above photo was taken by Scott Langley. You can see more of Scott's outstanding work here.)

The latest installment of the Tuesday's Focus series takes a look at anti-death penalty activist Abe Bonowitz. In his own words, Abe explains how participation in the Journey of Hope...From Violence to Healing affected him. Remember, the Journey will visit Virginia this October. You can learn more and find out how to get involved by going here.

As many of you know, I have not always opposed the death penalty. When I tell the story of my transition, I say, "The facts changed my mind, and the people I met on the Journey changed my heart."

By 1993, I had become a fairly active anti-death penalty activist through my involvement with Amnesty International, but I would still say things like, "IF we could make it fair and equal, I would pull the switch myself." But when I went on the Indiana Journey of Hope ...From Violence to Healing, I met and learned first hand the stories of people who have been "in the fire," as Sister Helen would say. It was certainly inspiring to meet and work with people like Bill Pelke, Marietta Jaeger, Marie Deans and SueZann Bosler and so many others who have lost loved ones to murder and forgiven the perpetrator. But what touched my heart -- what *changed* my heart -- was learning the stories of people like George White (with the double whammy of seeing his wife murdered and then being wrongly convicted of the killing) and Sunny Jacobs (with the double whammy of being wrongly convicted *with* her husband, who was also wrongly executed!), and others, including Randall Dale Adams, who was wrongly convicted and was nearly Texecuted. What changed my heart even more, was meeting people like Shirley Dicks, Ken & Lois Robison, Jill Fratta, Catherine Forbes, and so many others who have had a loved one convicted of murder - rightly or wrongly - and who themselves have been put through the wringer by a society that condemns killing but ignores the collateral damage created in the process of exacting revenge through execution.

Being on the Journey allowed me to not only meet these people and hear their stories. I got to know them. And by hearing their stories several times in front of different audiences as we spent 17 days traversing a state, I got to *know* their stories. Ever since that 1993 Journey, whenever someone attempts to dismiss me by saying I'd "feel different if my loved one was murdered," I respond with, "Maybe you are right, but let me tell you about my friend Bill (or Sunny or Sam or Marietta). And I share the stories I learned on the Journey. And it works!
ALSO on the Journey, I got plenty of practice talking about the death penalty as an activist. I learned how to lead marches, how to better convey our message through the media, how to handle hate-filled opposition with a loving response, and how important it is to provide a hug for a person who has just relived the most painful experience in their life over and over again.
The Journey made me the activist I am today. There is no better training ground for abolitionists. Period.

Links to Abe’s Journey:
Biography of Abe Bonowitz
Death Penalty Opponents Gather
Protesters Converge on Prison
Journey of Hope in Monterey
Journey Of Hope ...From Violence to Healing, Inc.
Seven Arrested on 25th Gilmore Anniversary
Opponents of the death penalty speak out
Marchers Spotlight Growing Scrutiny of Florida Death Penalty
A Discussion with Jeb Bush on the Death Penalty
Execution May Only Spur More Killing: Reflections on the "Martyrdom" of Paul Hill
Posted by Unknown at 12:50 PM No comments: