"(N)or shall any person...be deprived of life, liberty, or property, without due process of law." --
Article V, US Bill of Rights

The Petition with link below reads: "The secret US government assassination program that targets American citizens abroad and kills them without judicial review is not 'legal', 'ethical,' or 'wise' as the White House claimed.  It is wrong, and it should be stopped."


George W. Bush claimed that he had the presidential authority to declare Americans "enemy combatants" and throw them into a dungeon without access to the court system.

But even Bush, with his breathtakingly expansive view of executive power, never stood in front of the American people and claimed he could order the assassination of an American citizen without judicial review.
Yet yesterday, after a Department of Justice white paper on President Obama's extrajudicial assassination program was leaked, White House Press Secretary Jay Carney shamefully and appallingly defended missile strikes against American citizens as "legal," "ethical" and "wise."
There may not be the political will in Washington, DC, to address this clearly unconstitutional power grab by the executive branch, but as citizens it is our duty to say this is clearly illegal, immoral and a deplorable desecration of the rule of law.
The Obama administration has previously defended the extrajudicial program that has killed a number of Americans, including an American teenager who wasn't involved at all with terrorism.
We have been solemnly told that the constitutional right to due process doesn't mean that the president can't unilaterally order, without any input from or review by the judiciary, a Predator drone to fire a missile at an American citizen.
It has been "explained" that there's a secret legal memo that makes this "legal."
The president has refused to make this secret memo available to Congress or the American people, thus far only releasing an insufficient white paper that purports to summarize the administration's legal justification for extrajudicial assassination.
It's absurd, it's illegal, it's completely antithetical to democratic values, and it's morally repugnant.
Tell President Obama: Assassinating Americans without due process is wrong. Click the link below to automatically sign the petition:
http://act.credoaction.com/r/?r=6996409&p=secret_killings&id=54376-1036859-h2Do05x&t=4
At times like this, outspoken dissent is an important political act.
Thank you for speaking out. Your activism matters.
Matt Lockshin, Campaign Manager
CREDO Action from Working Assets
Posted by CN at 10:37 AM 1 comment:

CANADA: A question of innocence hangs over city's last execution; Harry Lee was the last man hanged in the city, but some say he didn't do the crime60 years ago Sunday, a 37-year-old synagogue caretaker was hanged at the Barton Street jail in what turned out to be the last execution ever to take place in Hamilton. But some people still contend that Harry Lee - whose mother was black and father was of Spanish background - was innocent of killing his girlfriend, Mary Rosenblatt, a Jewish married mother of 2.

"It was racism. There was no doubt about it, as far as I am concerned," says Allison Gowling, whose father knew Lee in the small village of Canfield in Haldimand. Lee grew up in the community before moving to Hamilton in the late 1930s.

"The general consensus was, I remember my mother talking about it, is that he did not do it. He was set up. They were a target because she was a Jewish girl running around with a black man."Gowling was born five years after the hanging but continues to carry the sadness his parents felt about the death of a man they believed was innocent. He says his mother was haunted by seeing grave diggers from her window suddenly showing up at the Canfield cemetery to dig the grave for Lee the night before the Feb. 3, 1953, hanging.

Gowling's view was shared by many at the time. An interesting memo that cropped up in Spectator microfilm written about the case from a William Hill argued the killing resulted from an effort by thugs to warn Lee "to keep away from white women." It escalated into the shootings, the note alleged.

In 1991, The Spectator interviewed Baptist church pastor E. Sidney Kerr, who walked with Lee to the gallows. "All who were involved were clearly of one mind. Harry Lee was an innocent man. It was a dreadful mistake and it should never be duplicated. Harry's colour did not help," said Kerr. In 1952, the case in Hamilton was sensational. Rosenblatt was found shot to death in Lee's 1939 Chevrolet sedan on Highway 8 in Sheffield in the early hours of June 2.

Lee had also been shot and was barely alive but managed to survive after being rushed to hospital. Police argued that Lee attempted to take his own life with a 22-calibre rifle after killing Rosenblatt. But Lee told court a fantastic story of being forced off the road by two strangers who shot them. Later, in his testimony, that story was modified by him saying he and Rosenblatt had been accosted at his Cannon Street home. They were forced into his car then made to drive to a secluded area where the shootings took place.

Lee, who was deeply religious, held out he was innocent right to the end - telling Kerr in his last words, "No, reverend, I did not (kill her). They're hanging the wrong man." He refused a Crown offer to plead guilty to manslaughter, which would not have carried the death penalty.

Hamilton hangingsA total of 8 people were hanged at Hamilton's Barton Street jail for murder from 1876 to 1953. All were men. -- On March 14, 1876, Michael McConnell, 38, was hanged for the murder of Nelson Mills. Mills was a tenant of McConnell and a dispute escalated to a fit of rage on the part of McConnell, who stabbed Mills to death.

-- On June 23, 1899, Benjamin Parrott, 30, was hanged for the murder of his 60-year-old mother, Bridget. During a drunken argument, Parrott split his mother's head open with an axe. -- On Dec. 7, 1900, George Arthur Pearson, 20, was hanged for murdering Annie Griffin. He claimed he meant only to threaten her with a revolver when the gun went off and the victim was struck in the head. After this, and realizing the "enormity" of what had taken place, he said he panicked and shot her a 2nd time.

-- On Dec. 27, 1907, Jacob Sunfield was hanged for shooting and killing Andrew Radzik. Sunfield claimed he was innocent. His last words were, "I have been warned not to make a statement. Goodbye, gentlemen."

-- On Dec. 19, 1919, Paul Kowalski was hanged for murdering Ignace "Knot" Trembluk during a robbery of $700. 2 weeks before his hanging, Kowalski murdered 2 of his jailers. He was not charged in those cases because it was argued he was being hanged and no further punishment could be inflicted on him.

-- On Jan. 12, 1927, John Barty, 50, was hanged for the hammer killing of Nancy Cook of Welland. It's said that "he took his last hours as calmly as if he were settling down before the fireplace for an evening's smoke."

-- On July 8, 1930, Mike Smith, 46, was hanged for the brutal murder of John Iwanetz, who was shot and pushed down some stairs at his Winona home during a robbery. 4 faced charges in the robbery, but Smith was the one to go to gallows. He claimed he was not the robber who fired the shot.

-- On Feb. 3, 1953, Harry Lee, 37, was hanged for murdering his girlfriend, Mary Rosenblatt. Lee claimed innocence but the Crown held that Rosenblatt died during a murder-suicide attempt that Lee managed to live through after shooting himself. Capital punishment in Canada

-- The last Canadian execution took place on Dec. 11, 1962, at the Don Jail in Toronto. Ronald Turpin and Arthur Lucas hanged for separate murders. -- Crimes that have been punishable by death at various times included murder, rape and treason.

Only 2 people have been executed for treason, 1 of whom was Louis Riel in November 1885 for leading an uprising. -- After years of commuting death sentences, the House of Commons abolished capital punishment on July 14, 1976, in a free vote. 1st-degree murder became punishable by life imprisonment with no possibility of parole for 25 years.  (source: thespec.com)

Harry Lee is led to court in this 1952 'spec photo 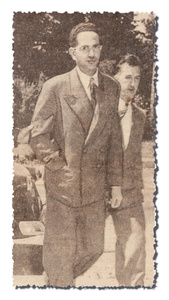