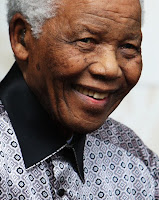 Nelson Mandela, the former president of South Africa from May 1994 to June 1999 and Nobel laureate, celebrated his 91st birthday on July 18, last Saturday. A special declaration was issued by leaders or foreign ministers of the Nonaligned Movement (NAM) last week to endorse his birthday of July 18 as the Nelson Mandela International Day.

Then, people may ask: Why does Nelson Mandela still have an unfading charisma and remained very popular after he had disappeared from the political arena for a full decade?

His charisma derives from his legendary experiences and from his firm belief and broadmindedness. Forgiveness oversteps the divisions of races, party origins and the rules of the human nature, extricating many South Africans from the shackles of hatred and injustice. For the past dozen years or so, the black and white people have co-exited peacefully in South Africa, its economy made historical substantial headway with a gaining momentum, and its international status is rising steadily.

Reviewing his life-long, rich personal experiences, racial segregations turned young Nelson Mandela into a “fearless youth”, who emphasized that “Equality is for everybody” and vowed to obtain equality for all those oppressed. For this reason, he plunged himself into the cause of national liberation in the name of a young freedom fighter, and he did indeed become the symbol of the struggle for national liberation in South Africa.

When he turned 26 in 1943, Nelson Mandela co-established the ANC Youth League to mobilize mass protest against racial discrimination in a hope of winning the black people’s rights through peaceful means. Nevertheless, a dozen years of strikes and protests and making agitated street speeches did not alter stark reality in his country. In 1961, Mandela turned to armed resistance and became leader of the ANC’s armed wing, Umkhonto we Sizwe (or the Spear of the Nation), and secretly carried out activities against the white people.

Nelson Mandela was arrested in 1962 and sentenced to five years of imprisonment with hard labor and, two years later, he was given a life term for the so-called crimes of sabotage. He spent most of his 27 years in the Robben Island prison, where he had endured the dehumanizing hardships in the island jail, located 12 km from Cape Town, which failed to break his heroism or spirit. After Mandela left Robben Island, the jail where he had stayed or served his terms remained as a towering testament to “the triumph of the human spirit, of freedom and of democracy over oppression.

The oppressed and the oppressors are needed to be liberated likewise and racists are also robbed of their humanity, Mandela acknowledged in his memoir, and added that racist prison officers were also prisoners. While in prison, Mandela lost his freedom of movement but achieved his ideological emancipation. This great mental transfer of Mandela’s has created the image of a new South Africa in the ensuing years and he himself became a world-renowned great man.

Nelson Mandela was released from prison on February 11, 1990, which was a significant milestone in the history of South Africa to shift to democracy. Afterwards, the Truth and Reconciliation Commission (TRC) was set up in South Africa in term of the Promotion of Nation Unity and Reconciliation Act, 1995, so as to urge those who committed crimes to ask for forgiveness and tell the truth about what they did toward the black people. With the influence of Mandela, black South Africans who had attained their freedom put down their arms pointing to the white people, whereas white South Africans, who have lost their privileges, lowered their proud heads.

When he walked out through the gate of Victor Verster Prison leading to freedom on February 11, 1990, said Mandela, it was become clear to him that he would have remained in prison if he had failed to leave behind distress and hatred.

By People’s Daily Online and contributed by PD reporter Li Feng
Posted by Susanne at 1:06 AM

This is a most wonderful post and reminder of our basic theme here on forgiveness!

Also, he role-modeled for all of us how to become friends with "the other" as he did in prison with one particular guard-friend - they shared so deeply on a universal level.

I absolutely loved his biography! And now there is a new comic book - sophisticated and compelling - of which he has approved! A great edition for any library - perhaps especially for grade schools, high schools and colleges?

And then his activism - even from prison - is well worth the study for our own nurture as activists...

Along the line of prison activism, here's the announcement of this compelling book and prison work for women:

http://www.indybay.org/newsitems/2009/07/21/18611934.php - While women comprise only nine percent of the U.S. prison population, their numbers have been increasing at a faster rate than men.

One more item - this one "by the way" - does anyone know how to access the recent CNN show on Troy Davis? I can't find the URL...Bill Pelke says it's quite positive.