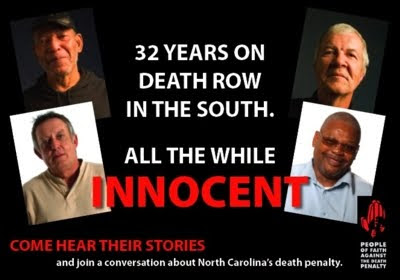 Come hear four men who were exonerated from death row after 32 years tell their stories at churches and community centers across Eastern North Carolina. Gary Drinkard, Randal Padgett, Deblert Tibbs, and Shabaka WaQlimi will be speaking in pairs on an eight-day tour starting with a brunch for clergy on Saturday morning in Greenville, NC.

"No one can describe the horror of the death penalty and the reality of life on death row better than someone who has experienced it," said John P. Comer, the Greenville‐based Eastern North Carolina coordinator for PFADP.

The tour is sponsored by two nonprofit organizations, People of Faith Against the Death Penalty and Witness to Innocence. The Pitt and Perquimans county branches of the NC NAACP and the Southern Christian Leadership Conference Pitt County, NC chapter are also co-sponsoring the tour.

Randal Padgett spent six years in prison and on death row for the rape and murder of his estranged wife before the Alabama Court of Criminal Appeals overturned his conviction. Prior to his own sentencing, Padgett had assumed innocent people were never convicted. "That isn't the case. Innocent people are convicted, and once you're convicted, it's difficult to find anyone willing to believe otherwise," he said.

Padgett will be joined Saturday by Shabaka WaQlimi of Charlotte, who spent 13 years on death row in Florida before being exonerated. They will speak in Greenville, Goldsboro, Winterville, and Washington.

Delbert Tibbs was in his second year of pursuing his master's degree at Chicago Theological Seminary when he decided to travel around the country. After a stop in Florida he was arrested for a rape of a 16-year-old girl and the murder of her traveling companion there. An all-white jury sentenced him to die based on a misidentification from the rape victim. He spent eight years on death row before the state supreme court overturned his conviction and the state dropped the charges.

Tibbs will be joined on the tour by Gary Drinkard, who was exonerated after six years on Alabama's death row. He later testified before the US Senate Judiciary Committee. Tibbs and Drinkard will speak in Wilmington, Greenville, Hertford, and at a brunch for clergy Elizabeth City.

"This tour will give people the chance to hear incredibly powerful stories and compelling testimony from individuals just like them - but who were sentenced to death and lived to tell about it," said Stephen Dear, executive director of People of Faith Against the Death Penalty, which is organizing the tour.

Seven people have been exonerated from death row in North Carolina, 138 nationally.

Kurt Rosenberg, executive director of Witness to Innocence, said that regardless of a person's position on capital punishment, he or she will learn a great deal from hearing one of these courageous individuals speak. "Their stories invariably have a transformative impact on audiences."

All of the following events are free.

Saturday, June 19 - Greenville, NC 9 am
"Discerning Justice: A Conversation Over Brunch for Clergy & Religious Leaders About the Death Penalty in North Carolina"
Featuring Exonerees Randal Padgett and Shabaka WaQlimi
Cornerstone Missionary Baptist Church, 1095 Allen Rd.
***This event is open to all clergy and religious leaders only.
RSVP at ksmith@pfadp.org

Saturday, June 26 - Elizabeth City, NC 9:30 am
"Discerning Justice: A Conversation Over Brunch for Clergy & Religious Leaders About the Death Penalty in North Carolina"
Featuring Delbert Tibbs and Gary Drinkard
Museum of the Albemarle
501 S. Water St.
***This event is open to all clergy and religious leaders only.
RSVP at ksmith@pfadp.org