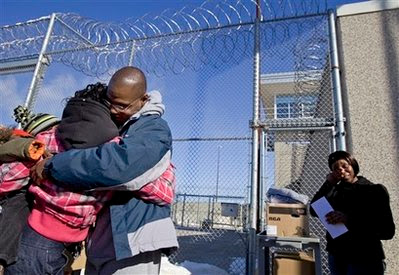 MILWAUKEE — A man sentenced to life in prison for killing a woman in 1984 had his conviction overturned and was released Friday on a personal recognizance bond after spending 23 years behind bars.

Robert Lee Stinson, 44, of Milwaukee, walked out of the New Lisbon Correctional Institution in street clothes and hugged his sister and members of the Wisconsin Innocence Project. A judge vacated the sentence after the Project argued that bite-mark analysis and DNA evidence that didn't match evidence from the crime scene, defense attorney Byron Lichstein said.

Stinson was convicted in 1985 of first-degree murder in the death of a 63-year-old Milwaukee woman. Evidence suggested she had been raped, and her body also had eight different bite marks, Lichstein said.

Stinson still faces a charge of first-degree homicide related to the woman's death, Lichstein said. A status hearing is set for July 27, according to online court records.

At trial, two forensic odontologists testified that Stinson's teeth were a match, even though Stinson was apparently missing a tooth in a place where the bite marks indicated a tooth, Lichstein said.

Milwaukee County District Attorney John Chisholm said in a statement Friday that Stinson's conviction was not wrongful, and that he was convicted based on "state-of-the-art scientific evidence available at the time of his trial."

"The question today is whether there is newly discovered evidence in this case to warrant a new trial, and we agree that such evidence exists," Chisholm said. The statement did not specify the evidence.

Lichstein, who last spoke to Stinson on Thursday, said his client was happy but in shock.

"I don't think it had completely sunk in," Lichstein said. "Personally, I feel a real sense of relief. It's been a long time coming for Mr. Stinson."

Stinson's conviction was based almost exclusively on evidence suggesting that bite marks matched Stinson's teeth, Lichstein said. The lawyer said he did not know why special technology was necessary if the missing tooth could have indicated there was no match.

"I wish I could tell you. I wasn't around back then," he said.

Steven Kohn, Stinson's trial attorney, said he didn't remember the details of the prosecution but recalled that the two state experts had discussed the case at a conference for forensic odontologists, leaving them unable to serve as defense witnesses. Kohn said he was forced to rely on an expert whose expertise was in dental records, not forensic odontology.

DNA taken from saliva on the victim's sweater also did not match Stinson.

For a decade, attorneys and even some forensic experts have ridiculed the bite-mark identification as sham science and glorified guesswork.

Critics say human skin changes and distorts imprints until they are nearly unrecognizable. As a result, courtroom experts end up offering competing opinions. But odontologists insist the science is sound if applied properly.

Since 2000, at least eight people in five states who were convicted largely on bite-mark identification have been exonerated, according to the Innocence Project.

Stinson attended a celebratory reception with family and other Innocence Project lawyers Friday afternoon. He previously told lawyers the first thing he wanted to do as a free man was to eat shrimp, which he did later at an Applebee's restaurant in Wisconsin Dells.

He maintained his innocence and said he planned to work on a book about his experiences, adding: "I'm finally out and I'm going to enjoy my life."