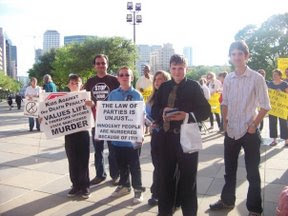 Lobby Days a Success!!! Some of this info in blog below on the KIDS 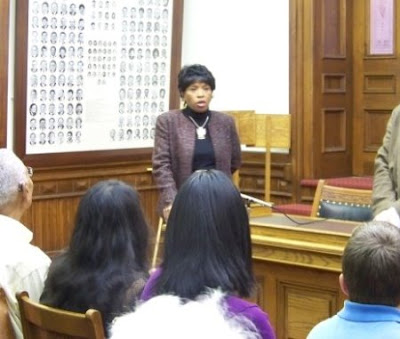 
There is another video at this site - so GO: here Shakespeare wrote, "if you have tears, prepare to shed them now." The father of Kenneth Foster starts speaking at around minute 23. The girlfriend of Randy Halprin gives her moving testimony at around the one hour point. The sister of Jeff Wood, Terri Been, starts her powerful testimony at around minute 32. Terri does a wonderful job explaining to the committee the injustice of the Law of Parties.
================
The following is a summary with excerpts from Texas Moratorium Network's report for other groups as well:

We had a tremendously successful Lobby Day Against the Death Penalty last week. Read more below. This Thursday there is a hearing on a bill to enact a moratorium on executions.

FIRST: Committee Hearing on a Bill for a Moratorium on Executions

This Thursday, April 2, the Capital Punishment subcommittee in the Texas House of Representatives in Austin will hold a hearing on Rep Dutton's moratorium bill (HB 913) at 8 AM in room E2.016. If passed, this bill would stop executions in Texas this year and the moratorium would last until 2011.

...On Lobby Day, we asked the chair to hold a hearing on the moratorium bill, so this hearing is a successful outcome of Lobby Day

If at all possible, please try to drop by the hearing and sign a form in favor of this bill, which would stop executions for two years and create a death penalty study commission. It only takes a few minutes to fill out the form in favor and then leave, but you have to turn in the form in person. You can also give a short 2-3 minute personal testimony, if you want.

Also contact the capital punishment subcommittee members and tell them you support HB 913.

Members of the Subcommittee on Capital Punishment

(you can find email links on the Texas Moratorium Network site yet they are often not as powerful as using Telephone or FAX.)

People from across Texas came to Austin on Tuesday, March 24, for a Lobby Day Against the Death Penalty to speak with legislators about the injustice of the Texas death penalty system. Issues we discussed included the risk of executing an innocent person (HB788), the need for a moratorium on executions (HB 913, HJR 24), abolition of the death penalty (HB 297, HB 682), the Law of Parties (HB 304, HB 2267), and impeaching Sharon Keller (HR 480).

The Texas Legislature meets once every two years, so we conduct a lobby day during the time when they are in session. This year was the largest lobby day ever against the Texas Death Penalty. We held a training session in the morning from 10 AM to noon to discuss the bills and issues and to train people in how best to communicate with legislators. Two weeks ago we held a special training session in Houston, so the group of people who attended that session were able to start lobbying at 10 AM after leaving Houston at 7 in the morning to drive to Austin. The familes of Kenneth Foster and Terri Been also started lobbying at 10 AM.

There was also a group of people who drove all the way from the Rio Grande Valley in South Texas to come to Lobby Day, included in that group was the family of Humberto Garza and Robert Garza, both of whom are on death row in Texas. Members of the Garza family are in the picture below. Family members of many other people on death row were also present, including family members of Howard Guidry, Rob Will, Louis Castro Perez, Robert Acuna, Juan Ramirez, Joseph Nichols, Randy Halprin and Raphael Holiday. They all spent all day visiting legislative offices. Thank you to everyone for attending.

The main focus of the lobby day was to advocate for the bill that would end the death penalty for people convicted under the LAW OF PARTIES, which is the law that allows people to be sentenced to death even though they did not kill anyone. The families of Kenneth Foster and Jeff Wood were at Lobby Day and went to many legislative offices all day telling and retelling the stories of Kenneth and Jeff, two people who were sentenced to death even though they did not kill anyone. Kenneth's death sentence was commuted to life in prison in 2007, after a long campaign on his behalf by many of the groups and people who also organized lobby day. Jeff Wood remains on death row, but many people are still fighting and organizing to save his life. Jeff never killed anyone. He was sentenced to death under the law of parties because someone else killed someone.

The sponsor of the Law of Parties bill, State Representative Terri Hodge, met with us at 1 PM in the House Speaker's Committee Room. She gave us an inspiring speech and pledged to do everything in her power to work for this bill. She broke down in tears briefly telling us how emotionally affected she was by the testimony she heard from the family members of people convicted under the law of parties at last week's committee hearing.

In all we contacted 90 legislative offices on lobby day, the majority were in-person visits by the people who came to lobby day, others were contacts by phone and email. We had many teams going to visit offices all day. We heard reports back from the teams that the receptions they got were overwhelmingly favorable. Based on the feedback we received, we believe that the bill to end the death penalty under the law of parties will receive a favorable vote in committee soon.

In 2007 Texas Moratorium Network was one of several groups that filed a judicial complaint against Sharon Keller. Our complaint was co-signed by almost 1900 people.

Last December, we convinced State Rep Lon Burnam to file an impeachment resolution in the Legislature.

Please call the Chair of the House Committee on the Judiciary and Civil Jurisprudence, Rep. Todd Hunter, R-Corpus Christi, and urge him to hold a hearing on Lon Burnam's resolution (HR 480) to create a committee to determine if Sharon Keller should be impeached. 512-463-0672. Email Hunter on his website form.

The AP is reporting that there are new complaints filed against Sharon Keller.

Texans for Public Justice filed the complaints in Austin against Keller, a Republican, with the Texas Ethics Commission and Travis County attorney's office.
=====================
Board member Members of KADP holding their awards for 2009 Youth Abolitionists of the Year. 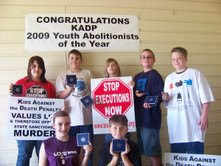 The award recognizes the hundreds of hours of activism performed by Kids Against the Death Penalty in the last year educating the public about the injustice of the death penalty. The hard work and passionate commitment of members of Kids Against the Death Penalty has greatly benefited the national movement to abolish the death penalty. Several members of KADP are relatives of Jeff Wood, who is on Texas death row convicted under the Law of Parties even though he did not kill anyone.

Scott Cobb of Texas Moratorium Network, one of the many people who nominated Kids Against the Death Penalty for the award said, "Martin Luther King, Jr wrote in a letter from a Birmingham Jail that 'injustice anywhere is a threat to justice everywhere'. That sense of injustice was what compelled Dr King to carry the gospel of freedom beyond his own home town. I have personally witnessed how Kids Against the Death Penalty have brought their message of justice beyond their own home town to cities throughout Texas. They have marched for miles along Texas streets holding anti- death penalty signs, through neighborhoods in Houston and down Congress Avenue in Austin to the State Capitol. They have stood vigil many times at the Texas Capitol when Texas has executed someone. They have visited the home of Texas Governor Rick Perry and pressed for justice. They lobbied members of the Texas Legislature on Lobby Day Against the Death Penalty March 24, 2009. Carissa Bywater of KADP testified to the Texas House Committee on Criminal Jurisprudence Subcommittee on Capital Punishment on March 19. (The video of Carissa's testimony is viewable here from the Texas House website, click forward to minute 57 and 50 seconds.) It is also now on YouTube. KADP has courageously spoken out on an issue in which relatively few other people in Texas, whether adults or children, have found the time or the courage to speak out about. By doing so, they are following in the footsteps of other children in America's past who have stood up for human rights".

"Children and teenagers played a significant role in the Civil Rights Movement. Barbara Johns was 16 in 1951 when she started a campaign for equal treatment at her school in Virginia. Her case became part of the landmark Brown v Board of Education decision by the U.S. Supreme Court that ruled that school segregation violated the Constitution of the United States. In 1963, more than a thousand children skipped their classes and marched in downtown Birmingham for equal schools. Many of them were arrested. Because of those kids' actions during the civil rights movement, we live in a country today where candidates for president are not judged by the color of their skin but by the content of their platforms", said Cobb.

"KADP has already inspired kids in other states to join the anti-death penalty movement. Because of KADP's hard work against the death penalty, both Texas and the U.S. have moved closer to the day when we live in a society where the state does not kill in order to teach the lesson that killing is wrong", said Hooman Hedayati. KADP members received commemorative medals and $100 to be used in their anti-death penalty work.

Also Gislaine Williams of Rice for Peace (Rice University) and Ashley Kincaid (University of Indiana) each received a Certificate of Achievement by Students Against the Death Penalty.

The Kids Against the Death Penalty have won the 2009 Abolitionists of the Year Award.