Frank Sterling, free to walk into the arms of family & friends! 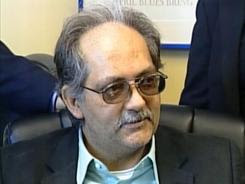 From The Innocence Project:

Frank Sterling is a free man today for the first time in 18 years. DNA testing obtained by the Innocence Project proved that he was wrongfully convicted, and Sterling walked out of a Rochester, New York, courthouse into the arms of family and friends just a few minutes ago.

His freedom was made possible by the support of hundreds of people who stood up against injustice by making a small donation to help pay for DNA testing and complex legal representation in his case and others.

Unfortunately the injustice suffered by Frank Sterling is all too common in our country — he is the 253rd person exonerated through DNA evidence and he will not be the last.

Sterling, who had no prior criminal record, was convicted based solely on a false confession he gave after a 36-hour trucking shift followed by 12 hours in police custody for interrogation. DNA testing implicates Mark Christie as the actual perpetrator. He is already serving a life sentence for murdering his four-year-old neighbor in 1994 — a crime that could have been prevented if police had not focused on Frank Sterling during the investigation.

It took nearly two decades of appeals for Sterling to finally get the DNA tests that would set him free. In January, DNA tests obtained by the Innocence Project excluded Sterling from multiple pieces of crime scene evidence, and were consistent with Christie’s profile in two key areas. Christie then confessed, offering facts about the crime that were not publicly available and were corroborated by other evidence.

Frank Sterling’s 18-year nightmare is finally at an end and he can begin to build a new life. The Innocence Project’s social work team will help him get his feet on the ground, and support from our Exoneree Fund will help provide him with immediate necessities.

We have more than 250 active clients today, and another prisoner will take Frank Sterling’s place on our docket. There’s a potential for DNA to prove these people innocent, but it takes hundreds of hours of legal work and expensive lab tests to set them free...