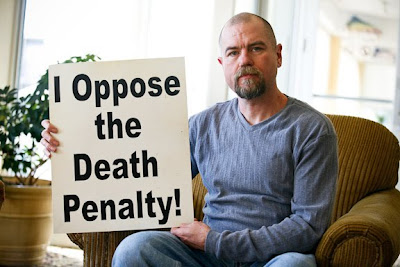 Curtis McCarty who is more qualified than most - regarding the need to abolish the death penalty - holds sign;
Scott Langley, photographer

...with thanks for your becoming a good friend to Mister McCarty and to many others....in peace.....


From a distance, Curtis McCarty looks every bit the tough guy. He is compact and muscular, with a buzz haircut and a penchant for frequent cigarette breaks.

But when he gets up to talk in front of a crowd, as he did March 14 at St. Elizabeth Ann Seton Church in Anchorage, a soft-spoken and thoughtful person emerges — a man who spent 19 years on death row for a crime he didn't commit.

McCarty is now a leading opponent of capital punishment.

Although exonerated by DNA testing, McCarty, who was sponsored on a speaking tour to Alaska by Alaskans Against the Death Penalty, has never quite exonerated himself from the bad choices he made in life.

"At 15, I started taking drugs and drinking, ditching school, carousing. I had an addictive personality and everything was a 'yes' or 'no' proposition with me. I became alienated from my family and my church. I felt there was nothing wrong, and refused to listen to anybody who tried to stop the chaos in my life."

The murdered girl – for whom he eventually went to death row — was a sometime-friend in the gang of drinkers and druggies with whom he hung. He mourned her death, and when called in by police, along with most of his cronies, he went willingly, providing everything they asked voluntarily – hair, blood, saliva. He took a polygraph. He wanted the murder solved as much as anyone.

"The man who killed Pam left a wealth of information behind that would incriminate him," said McCarty, but little of it, including a bloody footprint and finger prints on a window sill, were ever used.

Meanwhile, McCarty returned to his lifestyle.

"I failed to learn any lesson about how I lived my life or how Pam lived hers. I spent 3 more years in a lifestyle of addiction and petty crime."

And then, suddenly, McCarty was arrested.

"Despite my predicament, I still wasn't afraid. I had time to sober up, and I remembered all those things I'd learned — that we're a nation of laws, we have a Bill of Rights, that my hopes lie in a fair trial. But by the 2nd day of my trial, I knew I'd be found guilty."

Besides the murderer, who has never been found, the other questionable aspect of the case involved a forensics expert who was later placed under investigation for allegedly reporting false forensic results in other cases. At the close of the investigation, she was fired due to forensic fraud committed in several cases.

Although she had earlier written that a hair sample found did not match McCarty’s DNA, later she changed her statement, but the hair sample mysteriously disappeared.

The Innocence Project, a national program to investigate death row convictions, secured testing in 2002 on additional DNA recovered from the victim’s body, which did not match McCarty. Along with the discovery of the earlier hair sample opinion, this provided evidence to free him.

The years spent on death row, however, gave McCarty insights into incarceration.

"I'd heard my whole life about atrocities, brutal and savage men in prison. That's not what I found," he said. "I found young men, teens. No one had ever intervened in their lives. Most had killed, but not deliberately or with planning. Yes, there were some violent and predatory men."

"You had to make friends,” he added, and that was the cruelest thing, he said of death row.

"You came to know those men and watched them mature, come to terms, try to make amends, and then watch them die, one after another over the years," McCarty said.

His toughest memory is of packing up his best friend's property and being with him when he was placed in chains for his trip to the death chamber.

The experience convinced McCarty that the American justice system should concentrate on "restorative justice," rather than the current punitive philosophy.

Since his exoneration, McCarty is doing what he can to help the anti-death penalty movement. Raised a Baptist, he has deepened his faith, and although he has not converted to Catholicism, he does participate in the prayer and worship of the Sant'Egidio community, a lay-based Catholic group.

His friend and mentor, Alaskans Against the Death Penalty board member Bill Pelke has even taken McCarty to Rome for Sant'Egidio events.

Alaskans Against the Death Penalty has mobilized several speakers to rally against a proposed Alaska House bill, which would institute the death penalty in Alaska. The bill, which is opposed by Alaska's Catholic bishops, shows little sign of progress.

To find out more about the Sant'Egidio Community GO here and GO here
Posted by CN at 5:38 AM