"We are all connected" A Speech by Gilles Denizot 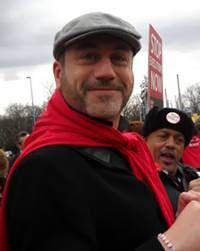 This is a speech Gilles Denizot (Journey of Hope Board Member and supporter) gave during the last teach-in session in Washington D.C. The original article is here I am not sure what Gilles wants for the title so renamed this post. Let me know if you'd prefer something else, Gilles?

Yesterday, standing under a tree was one of ours: a lovely, tiny elderly woman showing her support for abolition.

Not far from the tree, I noticed another woman holding a big sign that read “KAGAN LESBIAN” and “NO TO GAY MARRIAGE”. She was standing close to a group of people who were also holding signs to protest against various issues, including Supreme Court nominee Elena Kagan. It was clear that on one side of the pavement, the group was motivated by hate, while on the other side of the pavement, our activists were fighting the death penalty and displaying love for all of humanity.

I approached the young woman and asked her if she could explain her “No To Gay Marriage” sign. She began by telling me that Elena Kagan was a lesbian (which remains to be confirmed), that she would surely use her position to push for gay marriage throughout the USA (if only!), and that she needed to be stopped. At that moment, another woman joined the first one and stated that “marriage is between a man and a woman only”. I replied that I should be allowed to marry my partner and that discrimination was not the way to go. They were totally shocked and immediately began insulting me, saying that I was “Satan”, and from that point on, there was no possibility for me to be heard. I nevertheless asked why they would refuse me the right to marry the person I love, that the love for my partner was as meaningful as any other love shared between two consenting adults. They kept screaming that I was “sick” and tried to avoid me. I just had the time to add: “Do you know what my friends and I are doing right now in front of the Supreme Court? We are fighting the death penalty in the USA, where black people like you (yes, those women were Afro Americans) are executed at a higher rate than white people. I am protecting your right to life and you are trying to rob me of my right to marry.” I left, utterly disgusted and hurt. I had NEVER experienced anything quite like that.

I come from a country where, not long ago, human beings were tied to a wooden board, alive, and cut in two. Literally. It took great moral wisdom and immense political courage to stop this shame and horror. With a pro-death penalty President, and without political courage among most State governors, there might be little hope to see capital punishment being abolished anytime soon in this country. But the whole world is looking at the USA, and two-thirds of our world is supporting your fight for an “America that does not execute”. But the USA must be open and embrace the world. We will never win this struggle if we do not collaborate on an international level, if we refuse to see that we are all connected. As I always say: “You and only you will abolish the death penalty in your country.” On that day, however, we will be with you to celebrate. Throughout this long journey, we were wise and brave enough to understand the necessity to abolish slavery and torture. The next step is the universal abolition of the death penalty. We must turn from violence to healing, from vengeance to compassion. Our journey continues and it is a journey of hope.

The USA aspires to be a leader in human rights and to set an example for the whole world. In fact, the only real example the USA sends out on many human rights issues is a poor example. In the fight against the death penalty, several countries of the world (China, Japan, Taiwan…) have no intention of getting rid of capital punishment because the USA keeps executing its citizens (and those of other countries). In 9, and possibly soon 10 countries, homosexuals and/or people living with HIV/AIDS (PLWHA) are already criminalized and subjected to the death penalty because of who they love or because of a virus that already has a devastating impact on them. The un-equal rights for the American LGBT community sets a very bad example for the rest of the world.

In March 2009, three American evangelical “Christians” flew to Uganda and gave a series of talks on The dangers of homosexuality, on how to convert gays into heterosexuals, and explained why HIV-positive homosexuals “often contaminate teenagers”. Then they left.

A month later, on April 20, 2009, the first draft of an Anti-Homosexuality Bill was created. The proposed legislation defines a new crime of “aggravated homosexuality” for those who engage in sex with someone under the age of 18, who are HIV-positive, who is a “repeat offender” (so broadly defined as to include anyone who has had a relationship with more than one person, or who had sex with the same person more than once), or who had sex with a disabled person (consensual or not). The penalty for “aggravated homosexuality”: death by hanging.

The three Americans were helped by many others, notably by members of the American secretive group The Family (sometimes known as The Fellowship). There are some very interesting names in this family, well-known amongst US politicians, including South Carolina Gov. Mark Sanford. A man who is against same-sex marriage and civil unions, and who voted against allowing gay couples adopt children. A man who – when spotted – admitted having an extramarital affair. A man who not only is in favour of a harsher death penalty, but who, as Governor, has sole authority to grant clemency. A man who authorized 14 executions since 2003.

We are all connected you see.

I have been fighting this anti-human rights bill for a long time now. As the administrator of the Red Ribbon Army, a Facebook page with over 500,000 members, I repeatedly alert people against the criminalization of homosexuality and HIV/AIDS. I wish more members would take action. I wish the 1.2 million who gathered at the San Francisco Pride in 2009 (and those for the 2010 edition) would have shown their pride AND their support towards their brothers and sisters in Uganda and the rest of the world. In Paris, during the 2010 Gay Pride, ECPM (Ensemble Contre la Peine de Mort) activists marched along a truck carrying gallows, one for each country that still kills homosexuals: Nigeria, Sudan, Yemen, Mauritania, United Arab Emirates – a popular destination among gays (just saying…) – Saudi Arabia, Afghanistan (think about it next time you unroll the red carpet for Hamid Karzai…), Pakistan, and Iran (where gays are hanged before they had a chance to become adults). ECPM invited participants to sign their petition “HOMOS EN DANGER, L’OUGANDA VA VOTER ! / NO GAYS TO THE SCAFFOLD!” and many signatures were collected.

As I said, we are all connected. And some show solidarity more than others.

In November 2008, members of the LGBT community broadly supported Obama, allowing him to become the first Black President of the USA. Simultaneously in California, the infamous Proposition 8 (“Eliminates Rights of Same-Sex Couples to Marry. Initiative Constitutional Amendment.”) was passed with a 58 percent support among blacks who voted, well above the 52 percent Prop. 8 received from all voters. Much of that can be attributed to the strong religious tradition in the black community. Just like the two black women who attacked me yesterday, a lot of hate is generated instead of spreading the message of love.

A few months later (end of July 2009), CA Gov. Schwarzenegger (a European who sadly forgot the beauty of our death penalty-free zone) announced a minimum of $52 million budget cut in services from HIV/AIDS to child health care to domestic violence victim. Meanwhile, he wants to spend $400 million to construct a new death row facility. With over 700 condemned human beings, the death penalty system cost California taxpayers $137 million each year, whereas permanent imprisonment for all those currently on death row would cost $11 million/year. If everyone currently sentenced to execution were sentenced to permanent imprisonment instead, California taxpayers would save $1 billion in five years. California wastes money that could – and should – be used to recruit and pay more teachers, nurses, firefighters. The current worldwide financial situation touches us all, not just California. Although I deplore its growing impact on the American people, it might have one positive consequence: the abolition of the death penalty in the USA. I would prefer to see it abolished for moral reasons, but I will settle for economical ones if necessary.

I told you, we are all connected. We are all part of a large group of people called Humanity.

Find out more about Gilles other causes besides his passion for The Journey of Hope and his huge effort to end the Death Penalty here
Posted by CN at 9:08 AM

Thank you Connie for posting this! It actually was a speech I gave during the last teach-in session in Washington D.C. and the original article is at http://gillesdenizot.com/blog/archives/1051

Thanx for the article and the URL/correction...I will try to correct the title soon...

Gilles, since the original article at your archives had my original post's title as well, I am a bit confused :) So, let me know if I did the right thing to rename the post? All the best!