Strong support for US abolitionists on World Day 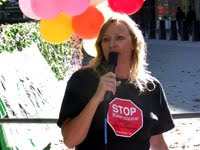 On 10.10.10, the 8th World Day against the Death Penalty focused on ending the use of the death penalty in the United States of America. Since 2003, abolitionists have taken actions all over the world every 10 October to raise awareness and opposition to the death penalty.

This year, to mark the World Day against the Death Penalty, dozens of events have been organized across the USA from Texas to Alaska, including in New York and Washington DC. All over the world, abolitionists have been hosting events in support of the American movement to end the death penalty (photo: London).

By encouraging debates and education on the death penalty on 10.10.10, worldwide abolitionists would like every citizen to understand that the fundamental right to life applies to all people, that the death penalty is irrevocable and can be inflicted on the innocent even in the most competent systems of justice.

The death penalty does not deliver justice

In the USA, as elsewhere, the death penalty does not deliver justice. Since 1977 more than 130 people have been released on grounds of innocence revealing significant flaws in legal process. It is also a system that continues to condemn people on discriminatory grounds and that diverts time and money from other more efficient law enforcement measures.

A 2009 report by the Death Penalty Information Center showed that the nation’s police chiefs rank the death penalty last in their priorities for effective crime reduction and they do not believe the death penalty acts as a deterrent to murder.

Although executions continue, the number of those sentenced to death has reduced. Today in the USA, 15 states do not have the death penalty and 11 more made legislative proposals to abolish capital punishment in 2009.

This World Day is the opportunity for abolitionists to work together, in the United States and abroad, to help continue this trend of restricting the use of the death penalty and to work to educate the public to bring about the end of its use.

By 2009, 139 countries in the world had abolished the death penalty in law or in practice, and 18 of the 58 retentionist states actually executed people. To support the American movement to end the death penalty is also to support abolition all over the world, to take another step towards universal abolition.

Published by Thomas Hubert on 2010/10/11 at World Coalition dot Org (113 reads) FIND original, read more about the dedication to US abolitionists; how the Arab World is moving toward abolition; a report about the Community of Sant'Egidio meeting with the president of Mongolia and archives including the World Congress to Abolish the Death Penalty - CLICK here
Posted by CN at 8:15 AM