May 9, 2012
This week sees the publication of an outstanding and beautifully crafted redemptive memoir by Marian Partington, whose sister was murdered by two of Britain’s most notorious serial killers – Frederick and Rosemary West.
Since founding The Forgiveness Project some eight years ago I am frequently sent novels, poems, memoirs, first-person accounts, critiques and sermons on the subject of forgiveness. I’m sorry to say that I find the majority either so proselytizing as to be unpalatable or so badly written as to be unreadable. Even the books which are not like this are often heavy going, dull or repetitive. So what I found so inspiring about reading Marian Partington’s If You Sit Very Still was that here was something entirely different – terrifying, authentic and beautiful. It was like entering a new world.
I first met Marian Partington just a few weeks after the start of the Iraq war, in 2003. At a time when the whole world was talking about retaliation, I was trying to collect stories from people who had considered forgiveness in the face of atrocity. I’d been told by a friend about Marian’s remarkable journey of healing following the kidnap and brutal murder of her younger sister, Lucy, at the hands of the Wests. I wanted to find out how anyone could line themselves up for forgiveness following an event of such unspeakable savagery. It was an important and pivotal moment for me. It was only after hearing Marian’s story that I realised that the ethos behind my own project could never simply be to present inspiring stories which drew a line under the dogma of vengeance, but rather must provide a place of inquiry for people to explore the limits and complexities of forgiveness.
I subsequently distilled our intense four-hour discussion into a short first-person testimony which, together with a stirring portrait of Marian by photographer Brian Moody, went on display alongside 26 other stories in an exhibition at the Oxo Gallery in London in 2004. I called the exhibition The F Word because by then I knew that forgiveness was a messy business; it was something which no one could agree on and seemed to inspire and affront in equal measure. Marian’s story of moving through murderous rage to a place of understanding and compassion made me realise that forgiveness should never be sanitised or glorified, that it was difficult, painful and costly, but also that it could be the crucial ingredient to transforming deep and unresolved pain.
Since that time I’ve been privileged to witness Marian sharing her story with numerous people in many settings, but mostly in adult male prisons, including one sex offenders’ wing. It is always a profound experience, to watch her telling her story to men who have harmed others. Invariable, and in an astonishingly short time, fixed perceptions start to shift, hardened attitudes soften, and even the most resistant begin to unbend.
Above all, it is when Marian brings out the little, woollen, hand-spun bag, carefully woven from stray sheep’s wool by her sister when she was eight, and passes it around the group that the mood settles in the room. It has always struck me that allowing countless strangers, one after the other, session after session, to handle and hold in the palm of their hands this most precious and delicate of gifts is an extraordinary gesture of generosity. By trusting these men with an object invested with so much emotional value, Marian transforms this story of hell into a message of hope.
I read If You Sit Very Still over one twenty-four hour period. I was mesmerized by the language and gripped not only by the need to know what happened next, but also to understand how anyone can truly reconcile with such evil. You feel you’ve been taken by the hand, led gently along a terrifying path (which few will mercifully know) into previously unchartered territory, and allowed to share in this deeply personal chronicle of grief.
Emerging through trauma, pain and finally to transformation, the author seeks to explain and give voice to a humanity born out of intense sorrow. She repeatedly and painstakingly searches for and then grasps the exact word or expression to faithfully describe every step of the journey until a new narrative emerges. This is a journey towards becoming forgiving – the only creative route Marian could find to soothe and mend her broken world. There were times I stopped to read and re-read the words as they unfolded on the page, in awe of her ability to explain the inexplicable, give meaning to the incomprehensible and describe such deep agony through the towering lyricism of her prose. The great accomplishment of this narrative of healing, is its capacity to uncover the gift in the wound which, to paraphrase W.B.Yeats, permits “a terrible beauty” to be born. 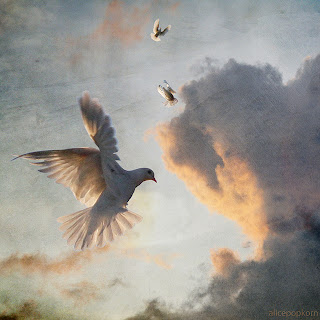 Be sure to see the two comments at The Forgiveness Project and more at this beautiful moving site! This amazing photo found here at http://becomingpeculiar.com/radical-non-violence/ -- the code for the photo : 4883065712_513f2279dd_z (1)
Posted by CN at 6:25 PM