A Lesson Before Dying by Ernest J. Gaines: See the Play--Read the Book 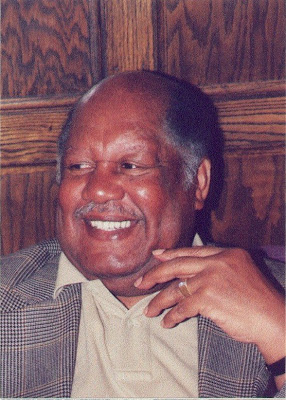 I read the moving, unique book this play is based on years ago--so did my daughter and we found it quite clarifying of the issues, in tune with southern death penalty history. We found this novel moving, the characters in the book "rounded" and haunting while the book was deceptively easy and compelling to read. Read it for a unique look and intro to the history of the death penalty -- especially in the US south - and see that many aspects of this story are still in existence today. There is something special that drives home the issues when you have a chance to get to know the people and to see what they go through...Do see the play if you are able yet even better -- read this classic book!

Ernest J. Gaines (born January 15, 1933), a prominent African-American fiction writer, has been a writer-in-residence at the University of Louisiana at Lafayette. Gaines's fiction has received critical acclaim. His works have been taught in college classrooms and translated into many languages, including French, Spanish, German, Russian, and Chinese. Four of his works have been produced into television movies. This novel won the National Book Critics Circle Award for fiction and was nominated for the Pulitzer Prize for fiction. He won the national Humanities Medal, ironically - a Governor's award, was inducted into the French Order of Arts and Letters as a Chevalier and more.

Even more striking, Gaines was among the fifth generation of his sharecropper family to be born on the River Lake Plantation in Pointe Coupee Parish, Louisiana, an influence and common setting for his fiction. He was the eldest of 12 children, raised by his aunt, who was crippled and had to crawl to get around the house. Although born generations after the end of slavery, Gaines grew up impoverished, in old slave quarters on the plantation. Gaines's first six years of school took place in the plantation church. A visiting teacher would teach him and the other children for five to six months of each year, depending on when the children were not picking cotton in the fields.

Excerpt to note from the following review - in notable keeping with some of our JOH themes - and NOT UNLIKE many of the experiences of our JOURNEY in so many states:

"On opening night, so many tears flowed that the show felt like a lesson before crying. A somber, reflective and brutal story, yes, but one pinned to a CRUCIBLE OF GRACE AND HOPE." Looking at Gaines' photo, reading about his life and reminded of this novel - I can't help but wish he could be on the next JOURNEYS with the JOH family - along with another Louisiana star, Sister Helen Prejean - and if so - sure hope it's one I am able to make!

THEATER REVIEW: "A Lesson Before Dying"

In Ernest J. Gaines' 1993 novel "A Lesson Before Dying" a young black man named Jefferson is falsely accused of killing a white merchant. When his defense attorney calls him a "hog," Jefferson is rendered sub-human and condemned to a deeper kind of psychological purgatory.

Jefferson shuns a maternal visitor's baskets of fried chicken and tea cakes, getting down on the floor to gnash at the food and grunt like a pig. But over the course of the story, he achieves spiritual rehabilitation and rebirth, thanks to the ministering of a schoolteacher and preacher recruited by his aunt.

Jefferson's journey —- his capacity to love and forgive in the face of brutality —- is on display in a strong production of Romulus Linney's adaptation at Theatrical Outfit. Delicately directed by Jill Jane Clements, the action moves painfully and methodically toward its inexorable conclusion.

Set in Jim Crow-era Louisiana, "Lesson" recalls such morally complex material as "To Kill a Mockingbird" and Horton Foote's "The Chase," both produced recently by the Outfit, the city's major producer of Southern drama.

At first glance, the plodding play can feel a little creaky, preachy and loaded with stock characters (the bigoted sheriff, the sensitive warden, the idealistic teacher). But as long as the criminal justice system is exacting the death penalty (in the state of Georgia, no less) and as long as America flaunts disparities of color and class, Gaines’ archetypal tale remains as ripe for debate as headlines and talk TV.

Here designers Jamie Bullins (sets) and Rob Dillard (lighting) create a mood of spot-on realism for the parish courthouse, where Jefferson lurches in from a nearby cell to receive visitors: His godmother, Miss Emma Glenn (Veronica Redd), never without a picnic basket in hand; the Rev. Moses Ambrose (Gordon Danniels); and plantation schoolteacher Grant Wiggins (Johnell J. Easter), who comes with his own set of troubles and conflicts.

Like some directorial angel, Clements takes great care in coaxing sensitively crafted performances from her company. Miss Emma's nerves are a source of good comedy. William S. Murphey, solid as always, struts like a rooster as Sheriff Sam Guidry. Rich Remedios, as the quiet deputy Paul Bonin, is almost always onstage, and though he says very little, he provides an aura of calm.

If Easter's Grant Wiggins seems a little flavorless, Eric J. Little's Jefferson is appropriately sullen —- a little broad at first but ultimately affecting. As Jefferson finds his peace in a twisted, bigoted world, time hangs. As he becomes a Christlike figure who is kind to children, his destiny transforms him. On opening night, so many tears flowed that the show felt like a lesson before crying. A somber, reflective and brutal story, yes, but one pinned to a crucible of grace and hope.

(source: Atlanta Journal-Constitution)
Posted by CN at 7:05 AM