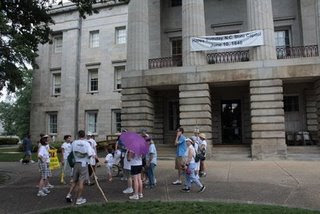 We stopped briefly at the NC State Capitol building, where Governor Bev Perdue may be called to make a life or death decision in future clemency appeals. We prayed that the death penalty will be abolished before that is needed. 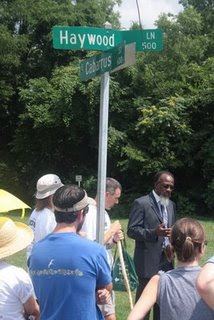 We continued walking and stopped in a Southeast Raleigh neighborhood, the site of three murders so far in 2009. Rev. Hardy Watkins, pastor of a neighborhood church, spoke to us about the community efforts to stop violent crime in the neighborhood and what the violence does to the families who live there. The local churches are uniting in trying to give positive choices to the youth in the area - to let them know that someone cares for them. He also spoke of the effects of gentrification on the neighborhood - the small houses which get refurbished and priced beyond the reach of the current residents, forcing them to move.

Follow More of the Daily Journal of this March - GO here

The Sojourners for Abolition and Reconciliation started their annual march Sunday to protest the death penalty.

"That will bring a kind of a ripple effect where people will hear our message who might not have heard it otherwise," Rider said.

"We're not trying to impose our view on anybody, but we really do want to talk to people," said Scott Bass, SOFAR walk organizer.

Wayne Uber, a Chapel Hill resident, has personal reasons for backing the death penalty. His twin brother, Jeffrey, was slain in Florida over some credit cards, and the killer received a life sentence.

"There are people out there who have strong feelings about this, but they haven't been here. They haven't seen what other victims go through. They just aren't qualified to comment on it," Uber said.

The state is under a moratorium on executions because of problems with lethal injection as the execution method.

"The death penalty is not the solution that helps anybody, but only adds more violence to situations that are oftentimes senselessly violent and tragic already," Bass said.

There are 167 inmates on death row in North Carolina, according to Death Penalty Information Center.

The SOFAR marchers will be back in Raleigh in about 2 weeks to rally in front of the General Assembly.