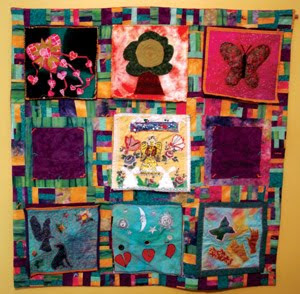 Healing and Hope: This quilt, created by the families of murder victims and death-row inmates in WNC, stitches together the stories of individuals and families forever affected by acts of violence. The quilt, and other works by local artists, will be on display at the commemorative Execute Art Not People event. Image courtesy of Alexandra Cury of North Carolina Coalition for a Moratorium


Asheville marks Amnesty International's Death Penalty Awareness Week:
Monday March 1st, The event will be held from 7 to 9 p.m. at First Congregational United Church of Christ, located at 20 Oak St. It's free and open to the public. Info: 828 252-8729.

Execute Art Not People is an evening of poetry readings, presentations, performances, music and interactive art that will commemorate Amnesty International's Death Penalty Awareness Week. The gathering, slated for Monday, March 1, at the First Congregational United Church of Christ in Asheville, has been organized to creatively oppose capital punishment while focusing community dialogue on this controversial issue.

The death penalty has been abolished in 15 states in the U.S., but capital punishment remains legal in the vast majority of states. In North Carolina, the Department of Corrections lists 159 offenders on death row, nine of whom hail from Buncombe County.

Amnesty International decries any form of punishment by execution, describing it as "the ultimate, irreversible denial of human rights." Here in Asheville, Execute Art Not People is a meeting ground for individuals who believe similarly.

"From my experience working in the prison system, I am convinced that dealing with violence and murder through the death penalty keeps us from addressing the problem for both the victim and perpetrator," says Rev. Mark Siler, who works as a chaplain at a state prison in Marion coordinating Christian services for prisoners. "I think my 8-year-old daughter said it best when she asked, 'Why do we kill people for killing people?' The core ethical problem is that the death penalty perpetuates [the notion] that violence can be redemptive." At Execute Art Not People, Siler will discuss the role that music plays in the lives of the prisoners he works with and will close the event with a song.

Former N.C. death-row inmate Edward Chapman, whose charges were dismissed after he spent 14 years on death row in Central Prison in Raleigh, will also give a short address. Local landscape painter John Mac Kah will contribute a painting titled "Cold Mountain," which he describes as both "an iconic image and a metaphor for the [often] cold and relentlessness of humans."

Additional works by local artists Anna Jensen and Linda Richards, plus works by death-row inmate Wiley Dobbs of Georgia, will be on display alongside the "Quilt of Healing and Hope." Assembled by the families of murder victims and N.C. death-row inmates, each patch of the quilt represents an individual or family reflecting on an act of violence that transformed their lives.

In addition, mediator and author of the book Grace Goes to Prison (Brethren Press, 2009) Melanie G. Snyder will discuss "restorative justice in a tough-on-crime world" and her work at the Pennsylvania state prison developing programs to promote accountability and nonviolence among inmates. Also, Asheville City Council member Cecil Bothwell will give a brief address.

(More events in NC and around the nation to be announced soon)
Posted by CN at 4:40 PM