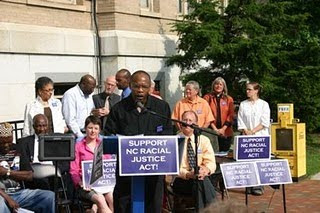 Note link to Edward Chapman's larger story below this post and see several other posts on the NC Crime Lab topic for September 14 and 15th here on The Journey of Hope blogsite below:

North Carolina's criminal justice system is so fraught with cheating that lawmakers should eliminate the death penalty to keep innocent people from being executed, local pastors and an exonerated death row inmate said Tuesday.

Speaking at a news conference in front of the Buncombe County Courthouse, participants said recent revelations about fraud in the State Bureau of Investigation crime lab only underscore an enduring problem.

"Our faith in the criminal justice system is shaken, but our resolve to make it better (is) not," said the Rev. Jim Abbott of St. Matthias' Episcopal Church. "We are deeply concerned innocent people may have been wrongly convicted."

Abbott and others cited a report issued last month concluding that the SBI crime lab omitted, overstated or falsely reported blood evidence in dozens of cases, including 3 that ended in executions.

Edward Chapman, who was exonerated in 2008 after 14 years on death row and now lives in Asheville, said law enforcement mishandling of his case led to a wrongful murder conviction.

"I can tell you how innocent people get convicted," Chapman said. "Police lied and hid evidence. I am one of many men in North Carolina that has wrongly been convicted and sentenced to death."

The Rev. Joe Hoffman, pastor of First Congregational United Church of Christ, called on Gov. Bev Perdue to commute the sentence of death row inmates to life in prison.

"This system has exposed itself for what it is," Hoffman said. "Unfairness and racial injustice have been present in our system for a very long time. We do not end violence by being violent."

Jean Parks of the group Murder Victims' Families for Reconciliation said her sister was murdered, but she has doubt about the guilt of the man who was convicted.

"It doesn't help us if the wrong person is put in prison," he said. "How can we be so arrogant in maintaining the ultimate punishment?"

Jury selection began this week in the trial of a McDowell County man charged with a shooting rampage that took the lives of his own daughter, his girlfriend and the woman's daughter.

The killings took place at his home on U.S. 70 in the Nebo community the morning of Jan. 18, 2008. Authorities said the shootings apparently stemmed from a decision by his girlfriend, Vicky Lowery, to move out of the house.

Buckner is charged with 1st-degree murder in the deaths of Lowery, 42, her daughter, Chelsea Gregory, 14, and his daughter, Rebecca Rose Buckner, 25. Authorities said all 3 suffered multiple gunshot wounds.

If convicted of the charges, the McDowell County Superior Court jury will be asked to decide between the death penalty and life in prison without parole.

The defendant also is charged with attempted first-degree murder in the shooting of Gina Marie Edwards, a relative of Lowery. Edwards, 21, was shot in the arm but managed to escape and call for help from a neighbor's house.

"Everybody in my house has been shot, and he is trying to shoot me," the neighbor recalled Edwards as saying.

Deputies called to the scene were met with gunfire, resulting in charges against Buckner of 6 counts of assault with a deadly weapon with intent to kill.

The officers returned fire and struck Buckner, who a neighbor said staggered about 20 feet into his yard and collapsed. He spent several days at Mission Hospital being treated for his wounds.

According to a search warrant, Buckner told a deputy outside his house that "everyone inside was dead." Investigators seized about 60 items from the home, including a 12-gauge shotgun and a .357-caliber Magnum handgun. They also collected bullets, bullet fragments and blood samples.

The month before the slayings, Buckner left his job with the state Alcohol and Drug Abuse Treatment Center in Black Mountain. It was the end of a career in public service that started in 1988 and included 9 years as a corrections officer at the Western Youth Institute in Morganton. 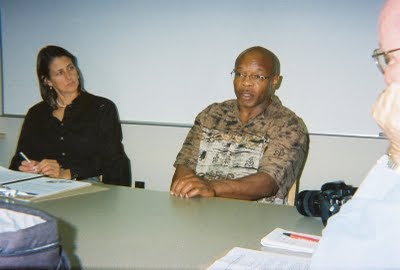 Edward Chapman, Exonerated from NC Death Row
Speaking to Library audience in Brevard, NC
(along with Alex Chapman who is an attorney and death row activist)
Photo by Connie Nash