Thousands of Religious Leaders - & Others - Speak for Clemency 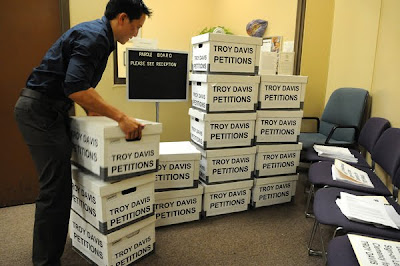 People of Faith Against the Death Penalty (PFADP), a nonpartisan, nonprofit, interfaith organization, has registered the support, through a signed petition, of over 3,000 faith leaders from all 50 U.S. states who are urging the Georgia Board to consider clemency for death row’s Troy Davis.

Davis, 42, convicted of the murder of Georgia police officer Mark MacPhail in 1991 has remained on death row for over two decades, even while his supporters assert that the case against him has fallen apart.

According to PFADP, the petition “contains by far the largest single set of endorsements from faith leaders for clemency than any letter of its kind in our country’s modern history.”

A number of other important faith leaders, such as Roman Catholic head Pope Benedict, have come out in support of clemency for Davis

Monsignor Martin Krebs, U.S. envoy for the Pope, sent a letter urging state officials to consider the special circumstances in the case: “The Pope continually exhorts all people, and especially those men and women who serve in government, to recognize the sacredness of all human life.”

Of late, much attention has been given to reports that many of the state’s witnesses have recanted previous statements and have sworn affidavits that they were pressured or coerced by police into testifying against Davis.

According to Stephen Dear, executive director of PFADP, request for signatures from religious leaders on clemency petitions usually result in comparatively fewer signatures. This is not surprising, considering the opinions of many Christians and conservatives in respect to the question of law and order.

In a recent debate of Republican presidential candidates, Texas Governor Rick Perry, who has attracted a great deal of evangelical support, received the loudest cheer when NBC’s Brian Williams stated that he had executed more individuals than any other governor in modern times.

Troy Davis is scheduled to be executed on September 21, 2011. His supporters are hopeful that the Georgia Board of Pardons & Paroles, which has scheduled a hearing in his case for September 19, will grant him clemency.

If you're a religious or spiritual leader plz add your name and speak out against Troy's execution here
Posted by CN at 3:38 PM