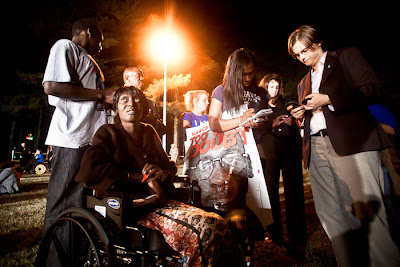 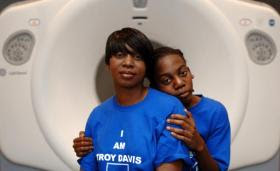 In this Dec. 2008 file photo - Martina Davis-Correia and her son Antone Davis-Correia sit in front of a CT scan machine at St. Joseph's Chandler Hospital. Martina has battled breast cancer since 2002 and gets CT scans every 3 months. She supports and is supported by her son, Antone Davis-Correia who was motivated to study engineering robotics and medical research because of his mother's diagnosis. Hunter McRae/Savannah Morning News - All rights reserved.

Martina Davis-Correia, sister of executed death row inmate Troy Davis, died Thursday evening at Candler Hospital after battling cancer for more than a decade. She was 44.

“I’ve thought for a long time that Martina’s fight for Troy is what kept her alive, and she must have been very tired,” Ledra Sullivan-Russell, a close family friend, said Thursday night. “She was the most extraordinary woman I’ve ever known.”

For 22 years, Davis-Correia led a crusade to stop her brother’s execution that gained thousands of supporters across the globe, including Pope Benedict XVI, the Archbishop Desmond Tutu, former President Jimmy Carter and former FBI Director William Sessions. Despite failing health, she continued to fight against the death penalty after her brother’s Sept. 21 execution.

Troy Davis, 42, died by lethal injection for the 1989 murder of off-duty police officer Mark MacPhail. MacPhail, 27, was rushing to the aid of a homeless man who was being beaten when he was shot to death in the parking lot of a Greyhound Bus station/Burger King at the corner of Oglethorpe Avenue and Fahm Street.

Davis’ execution was stayed three times as his lawyers filed appeals. Several witnesses changed their testimony and his supporters insisted that there was too much doubt in the case for Davis to be executed. Davis' death has fueled the debate over the reliability of eyewitness testimony.

“Our hearts are breaking over the loss of this extraordinary woman,” Curt Goering, chief operating officer of Amnesty International USA, said in an emailed statement. “She fought to save her brother’s life with courage, strength and determination, every step of the way... She was a tenacious fighter, a graceful inspiration to activists everywhere, and a true hero of the movement for human rights.”

Davis-Correia died at 6:30 p.m. She leaves behind a 17-year-old son, Antone De’Juan Davis-Correia, brother Lester Davis, and sisters Kimberly and Ebony Davis. Virginia Davis, Troy Davis’ mother who also fought against his execution, died in April at the age of 65.

Davis-Correia spent more than 10 years rearing her son as a single mother while fighting to stop her brother’s execution and fighting cancer.

A former Army flight nurse who served in the Gulf War, Davis-Correia was diagnosed with liver and metastatic breast cancer in March 2001.

For more on the Troy Davis case, visit savannahnow.com/troydavis

Above article found http://savannahnow.com/latest-news/2011-12-01/martina-correia-dies (leaving as is for easy sending)

By the way, Antone De’Juan recently spoke (along with Rais Bhuiyan) at the Southern Regional Amnesty conference in Charlotte, NC. What an awesome speaker with so much to share and with dignified humility. Respect he has for all he's learned from his mother, Martina! I was so glad to hear both he and Rais speak - they were the highlights for both me and my husband, Dale.

Martina will be missed by so so many - including a number of us activists, family and friends of death row prisoners (and former prisoners) who knew her from trips to conferences from the south and other occastions. She will inspire us forever.

(Thanx to Debbie Kearns for the heads-up on this sad/brave news.)

"Our hearts are breaking over the loss of this extraordinary woman," Amnesty International CEO Curt Goering wrote. "She fought to save her brother's life with courage, strength and determination, every step of the way. She was a powerful example of how one person can make a difference as she led the fight for justice for Troy Davis, even as she endured her own decade-long battle with cancer. And despite the terrible blow of his execution, she remained brave and defiant to the core of her being, stating her conviction that one day his death would be the catalyst for ending the death penalty."
Posted by CN at 4:16 AM

R.I.P my sweet Martina. I will never ever forget you or stop fighting.