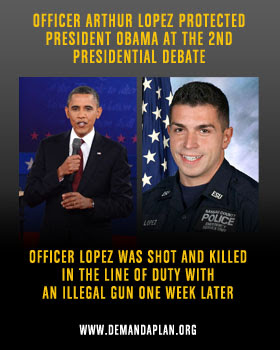 
Now that President Obama has won a second term, I am waiting to hear his plan to stop Americans from being murdered with guns.

At the second presidential debate, I asked the candidates how they would keep dangerous people from getting guns. At the same time, Officer Arthur Lopez was on duty at the debate venue -- protecting the candidates.

Exactly one week later, just before his 30th birthday, Officer Lopez was shot and killed in the line of duty with an illegal gun.

If I could ask the President another question, I’d ask what he is going to do to keep illegal guns out of the hands of dangerous people like the one who killed Officer Lopez.

I’m asking for your help. For our mothers, our sisters, our daughters – and for the millions of American women who have looked at a loved one past the barrel of a gun.

Officer Lopez was the kind of man who lived to serve. He shoveled snow for his elderly neighbor and baked apple pies to welcome new people to the neighborhood. He was even decorated, twice, for saving lives in the line of duty.

Tragically, heroes like him are gunned down far too often in this country. For the first time in many years, more officers are being shot in the line of duty than killed in car accidents.

President Obama has the power to do something about it and save untold lives. Please join me and call on him to close the loopholes that let felons buy guns with no background checks and no questions asked.

Thank you for honoring Officer Lopez and all those killed with illegal guns by taking action.