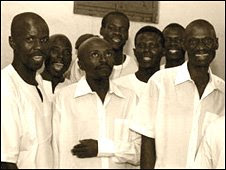 Death Row Prisoners in Uganda have formed a choir. Our Brother Edward Mgagi (Mpagi Edmary) will most likely has more to tell us soon about this choir and about this latest legal development. See his post just below...We will NOT be silent - nor will we give up in supporting Uganda's abolition struggle...Stay Strong, Edward!

We will continue to support the human rights groups who are supporting the abolition of the death penalty in Uganda.

Since we at The Journey are a most internationally-active group, we often post items from various places even outside the US...this is one unique aspect with Journey among many.

Uganda's Supreme Court has ruled in a case involving more than 400 death row inmates that the death penalty is constitutional.

However, it said that hanging was cruel and recommended that parliament consider another means of execution.

The judges also said it was unreasonable to keep convicts on death row for more than three years.

It means most of the prisoners involved in the case will have their sentences commuted to life in prison.

Although the death penalty has not been used since 1999, the court said it acted as a deterrent to murder.

But the judges also ruled that a mandatory death sentence - a legal term meaning that the penalty for murder is automatically death - was unconstitutional.

Parliament was asked to consider a means of execution other than hanging.

"I would agree with the respondents that hanging as a method of execution as it is carried out in Uganda is a cruel, inhuman and degrading punishment," Justice Egonda-Ntende said.

The BBC's Joshua Mmali in the capital, Kampala, says four prisoners were in court for the ruling.

Susan Kigula, the woman who led the other prisoners in filing the original petition, wept painfully as the actual implications of the ruling dawned on her.

Our reporter says whereas fellow petitioners on death row may escape the death penalty following the ruling, her plight is still unclear.

Her death sentence was only confirmed by an appeal court about a year ago.

It means she could still be hanged within the next two years, unless the president pardons her under the presidential prerogative of mercy.

The prisoners' appeal was supported by Ugandan human rights groups.

The Supreme Court's decisions reaffirmed the verdict of the Constitutional Court in 2005.

The attorney general had sought to overturn the 2005 ruling on the mandatory death penalty.
Story from BBC NEWS:
here

______
NOTE: For about a week, we at this blog may have difficulty posting every day...we will see--So --IF this blogsite is somewhat "quiet" for a short few days, please be sure to go to the links on the lower right, to our website, and to earlier blogs here which are not at all dated -- look for additional photos which will be added to the appropriate posts here below. INTERACT with us! Be patient for your COMMENTS to post as they are moderated and my co-blogger, Susanne and I may be tied up with abolition and human rights work for a few days. THANX so much for tuning in!)
Posted by CN at 8:13 AM