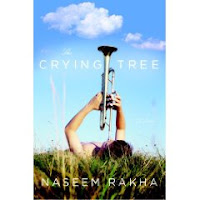 The Crying Tree is a new novel by Naseem Rakha that raises the real-life question: Could you forgive the man who murdered your son? Rakha is an award-winning broadcast journalist whose work has been heard on NPR's "All Things Considered" and "Morning Edition." The story of her novel is told through the lives of a mother whose son was murdered and the superintendent of a state penitentiary where the defendant's execution is to take place. Sister Helen Prejean, author of Dead Man Walking, said in review, "For anyone who has ever wondered how forgiveness is possible, even when the pain is overwhelming, wonder no more. The Crying Tree takes you on a journey you won't soon forget."

Irene and Nate Stanley are living a quiet and contented life with their two children, Bliss and Shep, on their family farm in southern Illinois when Nate suddenly announces he’s been offered a job as a deputy sheriff in Oregon. Irene fights her husband. She does not want to uproot her family and has deep misgivings about the move. Nevertheless, the family leaves, and they are just settling into their life in Oregon’s high desert when the unthinkable happens. Fifteen-year-old Shep is shot and killed during an apparent robbery in their home. The murderer, a young mechanic with a history of assault, robbery, and drug-related offenses, is caught and sentenced to death.

Shep’s murder sends the Stanley family into a tailspin, with each member attempting to cope with the tragedy in his or her own way. Irene’s approach is to live, week after week, waiting for Daniel Robbin’s execution and the justice she feels she and her family deserve. Those weeks turn into months and then years. Ultimately, faced with a growing sense that Robbin’s death will not stop her pain, Irene takes the extraordinary and clandestine step of reaching out to her son’s killer. The two forge an unlikely connection that remains a secret from her family and friends.

Years later, Irene receives the notice that she had craved for so long—Daniel Robbin has stopped his appeals and will be executed within a month. This announcement shakes the very core of the Stanley family. Irene, it turns out, isn’t the only one with a shocking secret to hide. As the execution date nears, the Stanleys must face difficult truths and find a way to come to terms with the past.

Dramatic, wrenching, and ultimately uplifting, The Crying Tree is an unforgettable story of love and redemption, the unbreakable bonds of family, and the transformative power of forgiveness.

A Q&A with Naseem Rakha

Question: How did the idea for the book originate? Had you always been interested in the Death Penalty?

Naseem Rakha: In 2003, I met a woman during a peace rally in my small town of Silverton, Oregon. She had just visited an inmate on San Quentin’s death row—an inmate who, twenty-one years earlier, had been convicted of killing her daughter. For years, she had lived for this man’s death, believing that his execution would end the pain of her loss. What she found, however, was that after ten years of waiting and hating, she had to give it up. She wrote the man and told him she forgave him. That arc, from the most desperate kind of anguish to reconciliation and even love stunned me, and compelled me to explore this journey through The Crying Tree.

Question: As a mother yourself, was it difficult to write from Irene Stanley’s perspective about the death of her child?

Naseem Rakha: Writers of fiction must have empathy—the ability to feel what others feel, and then express those emotions in a way that keep them alive. So yes, feeling Irene’s anguish over her son’s death was difficult, but so was Nate’s anguish, and Daniel’s, and Bliss’s and Tab Mason’s. On the other hand, life also offers us moments of inspiration, joy, and redemption, and as I wrote The Crying Tree, those life-affirming emotions far outweighed the weighty nature of the subject.

Question: Without giving anything away, secrets—Nate’s, Shep’s, Irene’s—are the driving force behind the tragedy in this story. When you first started writing, did you know how the story was going to unfold?

Naseem Rakha: I knew how the story would start, I knew the conflict, and I knew how I wanted the story to end. Everything else was a surprise. Sometimes a very big surprise.

Question: Through your research and writing, has your opinion about the death penalty changed?

Naseem Rakha: I did not write The Crying Tree to make a statement about the Death Penalty. Instead, I wanted people to confront the question of forgiveness. What does it look like, what does it take, and what can it possibly give? Intellectually, I oppose capital punishment. But, if faced with the murder of a loved one, I have no idea if my moral objections would stand up against my desire for vengeance. This is a question one hopes to never face, but perhaps through this book people will think more about their own capacity to live beyond loss.

Question: Who are some of your favorite authors? Were there any books that particularly inspired you to write this novel?

Naseem Rakha: I think of authors like Kent Haruf, who can tell deep stories about ordinary lives. I think of Jane Smiley, and how she brings characters to life through dialogue and setting. I think of Truman Capote and his ability to report an event and make it feel as tangible as knife cutting through a loaf of bread. No one particular novel inspired The Crying Tree, but voices of other authors informed my own writing style.
Posted by Susanne at 2:15 AM

Thank You, Susanne, for highlighting this book about loss and forgiveness!