"LET'S All Work for HANK and SANDRINE NOW!" Bill

The following caption is from Sandrine Ageorges-Skinner: Austin, the Capitol - March 18th - Press Conference with very special gardian angels: 6 exonerated from US death rows, Bill Pelke from the Journey of Hope, Deila Meyer and the wonderful student movement against DP, who speak up for Hank's urgent request for DNA testing and who stand by me every minute - without them, I'm not sure I'd still be standing up today. Thank you guys, you are a treat to human intelligence and I love you so!

Has anyone from Texas called Texas Catholic Bishop's Office? They will send a FAX if requestd which has been known to have effect. 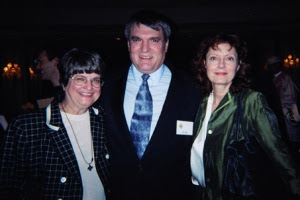 This photo is of Journey of Hope founder: Bill Pelke with Sister Helen Prejean (Dead Man Walking and MUCH more)and Susan Sarandon (Who played Sister Helen in the film version of Dead Man Walkine and more works related to abolishing the death penalty and justice/mercy)

Last Update - March 11, 2010 -here The case of Hank Skinner When the guilty verdict was passed in this case, Hank Skinner suffered a fatal injury in every sense of the phrase - injurious because his name was ...
here

The Texas Court of Criminal Appeals may be indifferent to the truth in the hank Skinner case (focusing only on procedural questions), but Chromosomal ...
Dallas Morning News (blog) - 5 related articles (See google search)

Also FROM google search from March 17:

AGAIN - PLZ CALL/FAX TEXAS Governor's Office (Again if you already have) to say NO to Hank Skinner's Execution HERE You don't need to live in Texas to call!
Posted by CN at 4:38 AM