Victims Who Oppose the Death Penalty 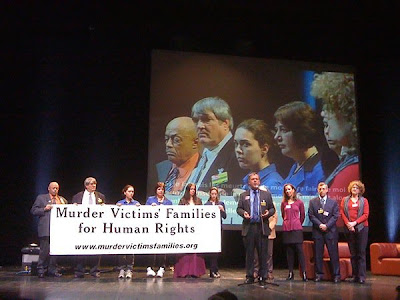 All over the world, there exists a common assumption that family members of murder victims will always want the death penalty for the person who killed their loved one. You hear it said that victims need justice, victims need healing, victims need closure, and the death penalty is the way to provide it. There are several things wrong with that assumption. Most victims reject the idea of “closure,” altogether, saying, as one mother put it, ‘there is no closure when a violent crime rips away the life of someone dear to you.” Furthermore, only a very small percentage of convicted murderers in the United States receive a death sentence. And a growing number of victims’ family members oppose the death penalty – for a variety of personal, political, and religious reasons. “The death penalty is not the way to honor our daughter’s life or her values,” says the mother of a murder victims. “The district attorney assured me that the execution of the man responsible for my daughter’s murder would help me heal,” says another mother, “and for many years I believed him. But now I know that having someone murdered by the government will not give me what I need.” “Survivors of murder victims would be much better served if the resources wasted on the death penalty were used to provide assistance for the victims and survivors of violence” says a third mother.

The Essential Role of Victims in the Death Penalty Debate

The assumption that family members of murder victims favor the death penalty, and that to be anti-death penalty is to be anti-victim, is common across national borders. We cannot expect to abolish the death penalty without challenging this assumption and offering an alternative view to lawmakers, journalists, researchers, and the general public. A lawmaker in the state of Montana was asked what most sways legislators to support abolition of the death penalty. He responded, “Number one would be murder victim family members who have stepped forward in opposition to the death penalty.” In the U.S., testimony from victims’ families has made a difference over and over again when state lawmakers debate abolishing capital punishment, and we are seeing a similar impact in Asian countries as well, as my colleague from Japan, Mr. Harada, will describe.

Not just abolishing the death penalty: the importance of working for victims

There are two human rights concepts that I think are important to understanding the victims’ perspective. One is the concept of impunity, which literally means “exemption from punishment or loss” and in human rights terms means a failure to hold accountable someone who has committed a human rights violation. I recommend giving this some further study, to see how this is handled in different societies. When someone you love is taken from you through an act of violence, you want to see the horror of that act recognized and addressed by the individual and by the society. This is why unsolved murders, for example, are a problem that deserves our attention. In my country, in the state of Colorado, a bill was introduced that would have abolished the death penalty and used the money to solve the many unsolved murder cases in that state. Many victims’ families came out to testify in support of that legislation. For them, finding out the truth about how their loved one came to be murdered, holding the right person accountable for that crime, was more important than the death penalty.

Another important human rights term is reparations. I’ll tell you a story from my own life to give an example of what I mean here.

A couple of weeks after my father was murdered, my mother got a bill from the ambulance corps in it. When she opened it, my mother said, “I can’t believe I have to pay for my husband’s murder.” The money wasn’t the issue; it was the idea that anyone would send a bill to a widow who had just seen her husband murdered in front of her eyes.

I realize that nobody purposely wanted to put that bill in the envelope and re-traumatize Marie Cushing two weeks after her husband was killed. It’s just that there wasn’t a full consciousness of victims’ needs or victims’ experience in the aftermath of murder and what impact specific actions or policies, or lack of policies, might have.

Some time afterward I testified in support of victims’ compensation legislation. I had come to meet other survivors of homicide victims and to understand what it was like for a mother whose baby was killed and who then couldn’t afford a funeral. Or what it’s like for families when the breadwinner has been murdered and as a result they lose their home or their healthcare. The idea of victims’ compensation is that for those who have suffered some material loss, there should be some kind of assistance. The state doesn’t blink at spending 2 million dollars to execute someone; would the state be willing to spend a tenth of that to meet the needs of victims?

Finally, an area in which we are working in the U.S., and that I think will be important elsewhere as well, is advocating for equal treatment of victims’ family members regardless of their position on the death penalty. We have documented instances of discrimination against victims’ family members who oppose the death penalty: they have been denied information about the court proceedings or denied the chance to speak (in a situation where another family member, who supported the death penalty, was given the opportunity to speak). I developed a piece of legislation called the Crime Victims Equality Act that prohibits discrimination against victims on the basis of the views on the death penalty. This legislation passed in New Hampshire last year and is now law; I am hoping that it can serve as a model for other jurisdictions.
Posted by Susanne at 12:40 AM