Group to censure physicians who play role in lethal injections 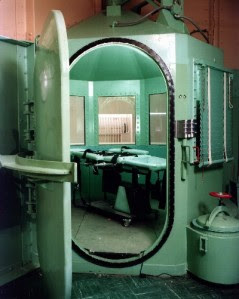 What are they thinking? Credit for the photo goes to James Renner November 11 story on his wordpress blog
See Titled article By Rob Stein
Washington Post Staff Writer
Sunday, May 2, 2010

A national physicians organization has quietly decided to revoke the certification of any member who participates in executing a prisoner by lethal injection.

The mandate from the American Board of Anesthesiologists reflects its leaders' belief that "we are healers, not executioners," board secretary Mark A. Rockoff said. Although the American Medical Association has long opposed doctor involvement, the anesthesiologists' group is the first to say it will harshly penalize a health-care worker for abetting lethal injections. The loss of certification would prevent an anesthesiologist from working in most hospitals.

About half of the 35 states performing executions, including Virginia and North Carolina, require a doctor to be present. Other states have also recruited doctors, including anesthesiologists, to play a role in executions involving lethal injections. In some jurisdictions, anesthesiologists consult prison officials on dosages. In others, they insert catheters and infuse the three-drug cocktails.

While death penalty opponents welcome the move because it raises yet more questions about lethal injections, capital punishment supporters contend that doctors are not needed during the procedures, which can be administered by prison employees. But as questions mount about the types and combinations of drugs used and whether they cause undue suffering, states have been turning to doctors for advice and assistance. With 3,200 prisoners now on death rows across the country, most of the 50 executions performed each year since 2008 have used lethal injections.

"If I were lying there on the gurney and someone was administering a paralyzing drug . . .I would want someone there who knew what they were doing," said Ty Alper, associate director of the Death Penalty Clinic at the University of California at Berkeley's School of Law. "Just like if I was getting surgery -- I wouldn't want a prison guard administering the anesthesia."
Loss of certification

Under the policy, which the group's 40,000 members learned about in February, any of these activities could lead to a loss of certification. Anesthesiologists can get state medical licenses without certification, but most hospitals require it.

Thus far, no doctors have been disciplined, Rockoff said, but several anesthesiologists, including some who have worked as execution consultants or testified in capital punishment litigation, said the step has had a chilling effect.

"They are clearly drawing a line in the sand and saying, 'If you cross this, we'll come after you,' " said Bryan A. Liang, a law professor at California Western School of Law and a professor of anesthesiology at the University of California at San Diego.

"It sure will deter me. For the ABA to threaten to pull your board certification is a big deal," said one anesthesiologist who has consulted for prison officials in his state about drug dosages. Arguing that the decision should be left up to individual doctors' consciences, none of those who criticized the policy agreed to be named, saying they feared repercussions.

Executions were halted in the United States from 2007 until 2008 until the Supreme Court decided in a Kentucky case that a commonly used three-drug cocktail did not violate the constitutional ban on cruel and unusual punishment. Now Ohio and Washington state have started using one anesthetic, similar to animal euthanasia.

"Before haphazardly making the single injection the new standard, we need to know if this will solve the problem of botched executions," said David B. Waisel, an associate professor of anesthesiology at Harvard Medical School. "If we are going to have capital punishment, it should be done humanely, with no additional harm to the inmate."

The 12-member anesthesiologist board, however, concluded that physicians can never violate the obligation not to do harm.

"This puts anesthesiologists in an untenable position," Rockoff said. "They can assuredly provide effective anesthesia, but doing so in order to cause a patient's death is a violation of their fundamental duty as physicians to do no harm."
A humane death

Critics have argued that prisoners may experience excruciating pain while rendered unable to cry out because one of the three drugs used in most states paralyzes them before they receive the next two, which can cause an intense burning sensation before death. Reports of chaotic, horrific executions have increased calls to involve those with more expertise, namely medical professionals trained in delivering and monitoring anesthesia.

"When execution gets botched, it's usually because of two major problems: because of difficulty inserting the catheters to inject the drugs or because something goes awry with the poisons -- either the prisoner is not unconscious and there's pain involved or the drugs cannot be administered," said Rockoff, an anesthesiologist at Children's Hospital in Boston. "So some states have thought, 'Why don't we get anesthesiologists involved to help us?' "

Maryland's executions have been on hold since 2005, and the District does not have capital punishment. In Virginia, the role a doctor plays in an execution and the type of physician involved is unknown.

While not taking a stand against capital punishment per se, the Raleigh, N.C., board decided that not only was the participation of an anesthesiologist unethical, but also it could make patients wary about standard medical procedures.

"When any of us go into surgery, it's a frightening time," Rockoff said. "If lethal injections are medicalized, it could make it look like operating rooms are like death chambers, that anesthesiology drugs are death drugs and anesthesiologists are executioners. That would all undermine public confidence in the medical profession."