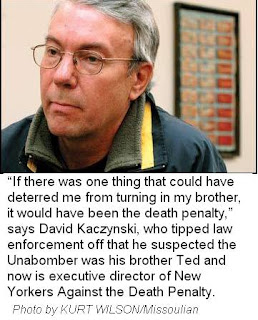 By TRISTAN SCOTT of the Missoulian

David Kaczynski says his efforts to abolish the death penalty were born of the same moral sense he had 12 years ago, when he first suspected his brother might be the person law enforcement called the Unabomber.

“My objective today is the same objective I had the day I turned my brother in,” Kaczynski said. “I don’t want there to be any more victims.”

Kaczynski was in Missoula on Tuesday with the Journey of Hope, a statewide speaking tour led by the family members of murder victims, the relatives of death row inmates and exonorees who seek alternatives to the death penalty.

In an interview with the Missoulian, Kaczynski said social injustices compelled him to join the group of activists, which tours the country and urges states to adopt anti-death penalty legislation. Capital punishment disproportionately impacts the poor, people of color and the mentally disabled, he said.

Today, David Kaczynski is the executive director of New Yorkers Against the Death Penalty. Although he has long opposed the death penalty on principle, he said the issue was never more immediate than the day he and his wife read the Unabomber’s manifesto in a newspaper and recognized his brother’s writing.

“Our family had struggled with an incredibly difficult moral situation. We looked at the truth when the truth had never been harder to look at. And if there was one thing that could have deterred me from turning my brother in, it would have been the death penalty,” said Kaczynski, who was dismayed by the Justice Department’s pursuit of the death penalty for his brother. “The death penalty is applied unfairly, it is administered unevenly, and it risks executing the innocent and the mentally challenged. It’s not justice. It’s skin color and good lawyers.”

With Kaczynski’s help, police where able to arrest Unabomber Ted Kaczynski at a remote cabin near Lincoln in 1996. Ted Kaczynski is serving a life sentence for sending mail bombs that killed three people and wounded many more.

Kaczynski is one of about 20 speakers headlining a statewide speaking tour, called From Violence to Healing. The group is sponsored by the Montana Abolition Coalition and spoke at the University of Montana throughout the day and at an evening event.

Another speaker, Bill Babbitt, is a friend of Kaczynski’s and compelled him to join the Journey of Hope tour years ago by telling him his own, similar story.

Bill Babbitt is the brother of Manny Babbitt, a veteran of the Vietnam War who in 1980 was convicted of murdering a 78-year-old woman during a burglary in Sacramento, Calif. In 1999, Babbitt was executed by lethal injection at San Quentin State Prison, just hours after his 50th birthday.

Like Ted Kaczynski, Babbitt was diagnosed with schizophrenia and convicted of first degree murder. Unlike Kaczynski, who is Harvard-educated, white and had a solid defense team of high-profile attorneys, Babbitt was black and was appointed a public defender who had never tried a criminal case.

And like David Kaczynski, Bill Babbitt turned his brother over to law enforcement after suspecting him in a string of burglaries and sexual assaults.

Marietta Jaeger-Lane, another speaker and a co-founder of Journey of Hope, was the mother of Susie Jaeger, who was kidnapped from her family’s tent at the Missouri Headwaters State Park near Three Forks and murdered more than 30 years ago.

On the one-year anniversary of Susie’s disappearance, the girl’s abductor called Jaeger-Lane on the telephone and taunted her. But her spiritual words about forgiveness disarmed him, and he spoke with the woman for more than an hour, revealing details about himself and the crime that helped the FBI solve the case.

Jaeger-Lane soon learned that Susie had been killed on a remote Montana ranch one week after her disappearance. The death penalty was applicable, but, at Jaeger-Lane’s request, prosecutors offered the alternative sentence of life imprisonment without parole. After the offer, the man admitted to the rape, strangulation death and dismemberment of Susie, as well as the deaths of a woman and two young boys in the same area.

“There was evidence that this man had caused more children’s deaths around the state, but the county prosecutors in those instances were insisting on the death penalty,” Jaeger-Lane said. “He would only confess to the deaths in Gallatin County, where he was being offered life imprisonment.”

Jaeger-Lane found no healing through hatred of her daughter’s murderer and instead turned to forgiveness and spirituality.

“I moved from wanting to kill him with my bare hands to believing that, in God’s eyes, he is just as precious as my daughter. She was worthy of something more noble, more beautiful than killing a chained, defenseless person,” she said. “It dehumanizes us, it degrades us, when we use the same violent methods as these offenders to solve our problems.”

“Every one of us would give everything we have to not be an authority on this issue because of our personal experiences,” she said. “Hopefully, when we offer our stories it gives people with similar experiences a new option for peace and health and happiness.”
Posted by Susanne at 12:36 AM