In 1992 Ray Krone, a former sergeant in the US Air Force, was sentenced to death row for the murder of Kimberly Ancona, a bar manager found stabbed to death in a restaurant near his home in Arizona. Ten years later, after running newly developed DNA tests on the victim's clothes, he was found innocent and freed. Krone was the 100th prisoner in the US to be exonerated from death row. Now a campaigner against the death penalty, he describes the long fight to clear his name

Being arrested was quite a surprise. On the day they found the body, they brought me in to the police station and questioned me for three hours. I told them everything I knew and thought that would be the end of it.

The next day they brought me to the police station to take blood and hair samples, as well as dental casts of my teeth, and they questioned me for yet another three hours. But again, I told them the truth. I knew I had nothing to hide. The next day was New Years Eve, December 31, 1991; I’d just got home and was in my driveway, getting out of my car, when all of a sudden a van screeched up behind me, the doors flew open and people were shouting “Freeze! Don’t move!” Armed officers in full riot gear spilled out of the van and arrested me right there.

Without any real evidence or any scientific support for it, the lead detective decided that I was guilty, and he acted on it quickly. I worked at the post office and it wasn’t as if I was going anywhere. But within two days the analysis had come back confirming that my fingerprints, footprints and hair had been found on the victim’s body. That stuff couldn’t possibly have come back from the lab in two days.

I knew the fingerprints and strands of hair at the crime scene weren’t mine. The footprints were of size nine shoes and I’m a size 11. DNA testing wasn’t as prevalent then as it is now and they simply said that whatever prints didn’t match mine had nothing to do with the murder. The size nine footprints at the crime scene were not only found in the kitchen where the murder weapon – a butcher's knife – was taken from, but they were also on the floor tiles next to where the body was discovered. I found out later that whoever made the initial police report had changed the killer’s footprints to a size 11 to make it fit my profile, and when they went to my house they couldn’t match them to any of my shoes. But then they found a local medical examiner who would testify that the bite marks on her body matched my teeth.

It didn’t matter what I said after that. It was like the frustration you feel when you’re a kid and your parents blame you for something your brother or sister did, only this time it was a sharper intensity of pain and lasted for a lot longer.

I was in contact with my sister regularly. I would tell her: “Don’t worry about it, I’ll be out of here any minute.” Seven months went by and I was put on trial for murder, but I was still telling her it would all work out. Then I got convicted and sent to death row. That was when it became a heck of a burden on my mom and my family. I was the oldest in the family, and had always been the responsible one – my folks knew to trust me if I said everything would be all right. Death row changed that.

When you get sent to death row you’re in a little cell the size of most people’s bathroom and you’re kept separate from all the other inmates. You can see them in the distance and yell out to them, but you don’t have any physical contact. I realised in a short time that if I was going to fight the system I’d better get to know it. I started going to the law library, reading up on case law.

Eventually it became known that the prosecutor had been withholding evidence and the Arizona Supreme Court granted me a new trial. The judge convicted me again, but said that there was lingering doubt of my guilt and sentenced me to life imprisonment instead of death row.

In 2001 a new law was passed making it easier for inmates to request DNA testing. The police still had items of the victim’s clothing so I asked the judge if I could have them tested. The prosecutor objected, as did the attorney general’s office, but nevertheless the judge ordered that it go ahead. The Phoenix police department put some of the DNA into the nationwide data bank, which is where the DNA of convicted felons all over the US is stored, and it came back with a match. It was a man who had a history of sexual assaults on women and children and lived 500 feet from the bar in which the murder took place. 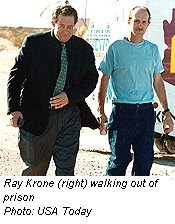 I remember that day clearly from start to finish. It was April 8, 2002. A Friday. It began as just another day in prison but at noon I was told my attorney was on the phone. He asked me how I was doing and I said: “Oh you know, fine, just another day in paradise.” He laughed and said: “What are you hungry for, Ray?” and I said that I guessed I'd eat whatever was in the chow hall. But he kept on and said: “No really, you want steak, seafood? How about a Margarita?” I asked him what the devil he was talking about and that’s when he said: “I just got off the phone with the prosecutor’s office. They’re cutting the paperwork. You’re going home today.” My heart stopped; I couldn’t breathe. Two hours later I walked out of prison. I kept looking over my shoulder in case they’d made a mistake.

What that prosecutor did, hiding evidence while at the same time actively pursuing the death penalty for me, could be seen as attempted murder. When I found out that he had covered up so much evidence and was still alleging that I got away with murder, even after I was released, I started talking to attorneys. I figured that this monster was never going to let me live, not as a free and innocent person anyway. I took out a lawsuit against him and after three years he settled with me – or rather the city and the county settled. We couldn’t sue him; we had to sue his supervisors for not training and supervising him.

The day I got out of prison was the day I won justice for myself and my family – and for all those friends and people who had stood up and defended me when the rest of the world was entitled to say “That guy’s a murderer”. I didn’t want to let any of those people down by coming out angry and negative; what I wanted was for my family to feel safe again, and proud of what they had stood for all those years. I wanted them to be proud of me.

My life started over again at the age of 45, and I walked out of prison to the distinction of being the 100th person in this country to have been exonerated from death row. There were a lot of anti-death penalty groups out there waiting for that milestone, and there was a lot of press coverage. One of the reporters asked me: “Mr Krone, given your faith in God, how do you justify Him leaving you in prison for 10 years?” I wasn’t sure how to answer a deep, soul-searching question like that and my mind went completely blank. Then suddenly it came to me and I said: “Well, maybe it’s not about those 10 years in prison. Maybe it’s about what I have to do in the next 10 years.”

So later on, when I had more time to think about it, I thought that maybe I was right, that maybe there was a reason why at the age of 35, when I thought I was running my life, everything suddenly flew out of control. I thought that this could be bigger than me, that there could be a reason why I was arrested, and why I got out of prison on the day I did. So I’ve been travelling around the country speaking to people about it and trying to raise awareness, because if it can happen to me it can happen to anybody.

It’s part therapy being able to talk about it – not keeping it inside where it can blow up one day – and it’s also important to feel that something good can come out of my experiences. People are beginning to realise that the justice system can make terrible mistakes and condemn innocent people. I didn’t see this as a career, and I certainly didn’t plan on being a motivational speaker or an activist against the death penalty, but in the same way that some people go to college for 10 years to become doctors or lawyers, it does give my time on death row some sense of purpose.

Ray Krone is now a director of Witness to Innocence, an organisation that campaigns against the death penalty. He was interviewed by Anna Bruce-Lockhart, TheGuardianWeekly
Posted by Susanne at 6:08 AM