HUGS and CONGRATS to Our MARIETTA! Three Forks Woman to Receive Peace Award

I heard her for first time in my hometown and was in tearful awe. I became part of her "family" when on The Journey of Hope in Texas. In each occasion she speaks without flinching yet from the most tender place of her heart and faith. 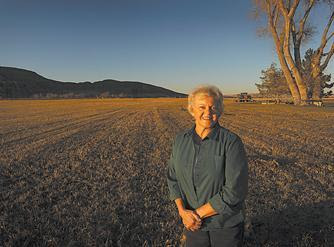 ERIK PETERSEN/CHRONICLE Marietta Jaeger Lane poses for a photo by her Three Forks area home Monday evening. Lane has been named the recipient of the 2009 Jeannette Rankin Peace Award for her work against the death penalty
Three Forks woman to receive peace award

Excerpt: “The bottom line is: Do we really honor the victims by taking on the same mindset of resolving our problems that the murderer did?” she said Monday... “Forgiveness is life-giving,” she said. “Initially, I would have been happy to kill the kidnapper myself; I just didn’t know who he was.”

A Three Forks woman who has embarked on an unlikely crusade against the death penalty will be honored with an award previously bestowed on luminaries like Sens. Mike Mansfield and George McGovern.

Marietta Jaeger Lane has been named the recipient of the 2009 Jeannette Rankin Peace Award, given by the Institute for Peace Studies at Rocky Mountain College to one person for “having lived a life dedicated to peacemaking at any level.”

In 1973, Lane’s 7-year-old daughter was kidnapped from her tent while she was camping near Three Forks, molested and killed. While Lane says she initially would have killed the murderer, David Meirhoffer, if she could have, for the last 36 years she has been a vocal opponent of the death penalty, speaking internationally on the subject.

“The bottom line is: Do we really honor the victims by taking on the same mindset of resolving our problems that the murderer did?” she said Monday.

“Forgiveness is life-giving,” she said. “Initially, I would have been happy to kill the kidnapper myself; I just didn’t know who he was.”

Meirhoffer admitted to killing Susie Jaeger and three others in Gallatin County, but hanged himself in jail before he stood trial.

Cindy Kunz, administrator at the Institute for Peace Studies, said board members who select the award recipient were impressed by both Lane’s work on the death penalty n which has included in presentations to the U.N. Commission on Human Rights in Geneva, Switzerland n and her work with the Michigan Coalition for Human Rights, where she worked to end racism and prejudice.

“She had every right to have a vendetta, but she stepped past that,” Kunz said. “It’s a unique award, and Marietta fit our criteria to a T.”

The award will be presented in Billings Nov. 20. Along with Mansfield and McGovern, previous recipients have included Archbishop Raymond Hunthausen, an Anaconda-born Catholic who protested nuclear weapons and advocated for the poor, and Greg Mortenson, the Bozeman man who builds schools in Central Asia.

Lane said she attended a presentation given by Mortenson in Bozeman last week, and was humbled by it.

“There is no way I belong in the same category as this man,” she said. “He is a real hero, a real servant.”

Last winter, Lane lobbied for a bill that would have abolished the death penalty in Montana. While the measure passed the Senate, it died in a House committee on a nearly party-line vote.

She is also speaking out against the execution of John Allen Muhammad, better known as the “D.C. sniper,” which is scheduled for today.

“I just think we need to aspire to higher moral principles,” she said.

Marietta, you are the greatest. I have said many times, without you, there would not be a Journey of Hope...from Violence to Healing.

Kathy sends her love and congratulations