Holder: A less aggressive approach to the death penalty? 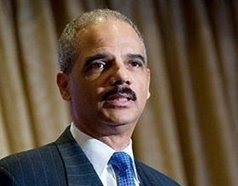 Not only does Holder's reversal likely spare defendant Emile Fort his life, but it may signal a less aggressive approach to the death penalty in federal court. And it vindicates the local U.S. attorney's office: Months ago federal prosecutors in San Francisco had recommended a 40-year plea bargain for Fort to their higher-ups in Washington - only to be rebuffed by Holder's predecessor, Michael Mukasey.

The jury heard opening statements Wednesday in the case against Fort, an alleged member of San Francisco's Down Below Gang who's accused of three murders. Yet when defense lawyers arrived in Northern District Judge William Alsup's court Friday morning - expecting another day of witness testimony - federal prosecutors announced their decision to deal, said Michael Thorman, one of Fort's attorneys.

Alsup dismissed the jury and scheduled a special hearing for today. The defendant had the weekend to decide whether he wants to plead out, and Thorman anticipated that he would.

The Down Below prosecution has been a searing episode for the local U.S. attorney's office. The original prosecutor on the case, Richard Cutler, opposed seeking the death penalty against Fort and co-defendant Edgar Diaz. After the Justice Department took the opposite stance, the administration sent an investigator to San Francisco to question Cutler about the case. Cutler left the office soon thereafter.

As the case moved forward, Cutler's successors and defense lawyers agreed on a 40-year deal for both Diaz and Fort. Mukasey agreed to the Diaz deal, but not the one with Fort, who is accused of murdering an infant (albeit unintentionally). Alsup spent many weeks in November and December assembling a death-qualified jury, and the trial was expected to take months.

Fort's new deal will be much the same as the one Mukasey rejected, except Fort will not get credit for 16 months he had spent in state custody, Thorman said. A spokesman for U.S. Attorney Joseph Russoniello could not answer questions late Friday afternoon.

"If this signals the Justice Department is giving more respect and reliance to local decision-making, I think it's a good thing," Thorman said.

Contacted Friday, Cutler, now at Dechert, said he was happy Holder agreed to the deal. "I think, based on the facts of this case, 41 years in prison is the right outcome," he said.

Thorman wouldn't be quoted about his client's reaction to Holder's decision, but the defense lawyer described his own feelings as "relief, and a recognition that at some point I wasn't going to be hospitalized for exhaustion."
Posted by CN at 12:19 PM

Although not the highest reason for abolishing the death penalty, here is one of the most recent discussions & a recent report: COSTS: