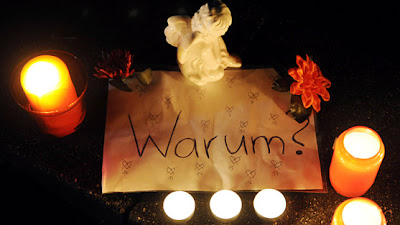 "Warum?" ("Why?") This is the message which can be read on hundreds of signs which were laid down in front of the Albertville Realschule in Winnenden last week.

"Warum?" This is the question which we hear over and over again. No matter which TV channel we turn to, everyone talks about what happened in Winnenden and asks why it happened.

"Warum?" It's the question that haunts the German nation in these days.

"Warum?" So many lives lost, so many families ripped apart, so many students who suffer from the pictures they had to live through, so many people mourning...

"Warum?" A question another family is surely asking itself as well: the family of Tim Kretschner, the 17 year old who first shot 15 people and then killed himself.

What remains is a lot of grief, a lot of horror, of not understanding and of asking what could have been done to prevent this shooting spree.

Germany has very strict weapons laws, with gun holders having to fulfill certain criteria on age and weapons expertise to obtain a firearms license. And after the shooting spree in Erfurt (in the year 2002) it got even stricter: state governments supported the federal government in passing a new law banning pump-action shotguns and raising the minimum age for ownership of sporting guns from 18 to 21 and for hunting weapons from 16 to 18. It also requires any prospective target shooter younger than 25 to have a doctor's certificate proving mental capacity to own weapons. A separate examination process was already in place for owners of hunting weapons. In Germany not everybody is allowed to own or buy a weapon. And even if you are allowed to, one has to keep the weapon unloaded in a locked cabinet and the ammunition has to be kept in another locked cabinet with no one but the owner of the gun knowing where the keys are.

But Tim's father did not act due to the German law: he owns 17 guns, 16 of which were locked up but the 17th he kept in his nightstand in case "someone would break into the house and he would have to defend his family".

Now we've had three shooting sprees in schools in Germany and in all of these cases the shooters used legally owned weapons. 18-year old Bastian B. (the shooter of Emsdetten) had a gun license (for sports shooters) - luckily in Emsdetten although lots of people got injured the only one dead after the spree was Bastian himself - he killed himself. 19-year old Robert Steinhäuser (the shooter of Erfurt. He killed 10 students, 2 teachers, the school secretary and a policeman before he killed himself) was member of a gun club and Tim's father is member of a gun club as well. None of them had to try to find a weapon somewhere, the weapons were just there when "needed".

Why? Nobody will ever be able to tell why Tim killed so many but one thing is absolutely clear: If there had not been any weapons around, these shooting sprees would have never happened!

Tim's father will face legal investigation and will probably get punished for not obeying the law and locking all of his weapons up but this will not bring the dead back to life. And Tim's father will always have to live with his guilt.

What is happening now? What is going on over here?

Politics is trying to find ways to prevent things like this for the future. Schools are talking about prevention, about training for the worst case and about trying to figure out "troubled" students earlier and try to help them BEFORE anything can happen.

People try to somehow comprehend what was going on, try to somehow go on with their lives. The school administration in Winnenden offered the students who want to attend classes the option to do so (not in the same school building but in different schools and public buildings). This is offered on a voluntary basis. The school heads hope to give the students some kind of skeleton to hang on to after all they've lived through - after all they will still face.

Although there is a lot of psychological help - of course it will be a while before the students and teachers from Winnenden will even begin to get over what they had to live through - a long time before the victim's families will be able to go on with their lives. One of the students who lived through the Erfurt massacre in 2002 was talking on TV this week and she still suffers and has fears and nightmares although she does have constant psychological help.

In June 2002 12 people from Littleton came to Erfurt to help the students here in Germany. Two of the Littleton students - Evan Todd and Heidi Johnson - told the people in Erfurt what they had to live through. Both of them were wounded during the spree in Littleton and both of them had to watch their fellow students die.

Evan and Heidi were holding up a photo of an other student: Rachel Scott who was killed in the spree just a few days after the photo had been taken. Then Rachel's sister Diana read from her sister's diary which spoke of her hopes. This reading and the sister's comments told the Erfurt students more about the wishes and dreams of this girl who got killed: Rachel was dreaming of respect and charity and this is the legacy toward which these students from Littleton wanted to live.

Pastor Porter who had accompanied the students from Littleton had already asked at Rachel's grave: Who wanted to keep this legacy? The pastor repeated his question in Erfurt, the arms of all the Erfurt students rose.

"Warum?" We will never be able to answer this question and there is nothing any more we can do to make this horrible crime undone. There is not much we can do to help the victims of the spree to heal. But all of us can keep this legacy of the girl who was killed in Littleton: respect and charity to everyone.

Wow, I just now read through this incredibly haunting piece with it's ending of a call toward the highest possible legacy. I was here at the computer with my husband. We both looked at each other with tears in our eyes. It was my third time through today.

I am so honored to be a co-blogger and friend with Susanne, the writer.

I am so filled with gratitude that some years ago, our friend Bill Pelke made the decision not to hate or seek revenge - NO, but rather to find other ways to respond and react to such events.

What a gift you have brought to all of us here, Susan, through the report from their and through the story there of the Littleton students and pastor!

Now we all have this to help us along with the touching and substantial legacy of Rachel, the student who died in that American school tragedy in the town where I once lived as a child.

May many others read, weep, prayer and seek out of tragedies such as these and lesser ones a legacy of charity, love, compassion and respect for all of humanity.

I also want to add that since I wrote the last Comment to this blog, Warum? Why? - there was yet another tragic injuring of helpless Moms in France near a childcare center. And we haven't but touched on or even mentioned others in the US and elsewhere.

So, ongoing concern without singling out places or types of folk are needed. This is a complicated issue, Prevention, albiet with some complicated/compound & some profoundly simple dynamics, like the question: what can we do,what could we have done BEFORE such a tragedy occurs to make it less likely next time?

Please send your comments as well.

And way tops on the list is how to provide the best kind of support for the victims' family members to survive with some manner of mental and spiritual health? To always remember, no matter how glad we are for the abolition of the death penalty, here, such as in New Mexico - that at the same time, we must needs also honor and care for the victim's family. We must always support the means to healing whether or not there is early on or late a recognized need.

Perhaps healing doesn't always need a lot of money? What have you known to be some sources of such healing?

All of the above are in keeping, if not central, to the mission and stated definition of
The Journey of Hope and therefore this blog.

Your comments? Your suggestions?