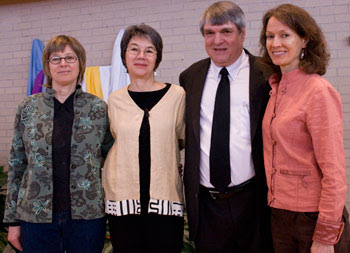 Bill Pelke’s grandmother, Ruth Pelke, was killed by four teenage girls in Gary who robbed her house May 14, 1985.

These acts of violence devastated two families and, for the Klassen sisters, infected the years of their youth. Their path to adulthood was fraught with struggles of how to heal and when to forgive.

On March 15 at College Mennonite Church, Pelke and three of the Klassen sisters spoke about their evolution from fear and anger to healing and forgiveness. Their stories have been told around the world through Journey of Hope, an organization co-founded by Pelke and led by murder victims’ family members, such as the Klassens, who oppose the death penalty.

Suzy Klassen was 11 in 1969 when she walked into their Elkhart home after school one Friday to find her mother raped and strangled. Klassen was the youngest in the family, and at that second she was set apart.

“From then on,” Klassen said, “I would live in a world where I had met evil face to face.”

The first time Klassen saw the painting “The Scream” by Edvard Munch, she was flabbergasted. It was like seeing a reflection of herself and the physical horror she confronted that day.

On Friday their mother had died. On Sunday the family returned home, seeing bullet holes in the floor and fingerprint powder on the walls. Monday was the funeral. Tuesday the girls returned to school.

After Helen Klassen’s death, family members lived on their own islands of grief, isolated from each other by pain and fear.

Because the murderer was never caught, the girls spent years in fear for their own lives. Suzy Klassen and Bess Klassen-Landis had escape routes choreographed in their minds.

“I felt like my mother’s murderer always knew where I was,” Klassen-Landis said.

Otto Klassen, their father and a child psychiatrist, tried to hold the family together but had no place to direct his pain.

Their distance became physical as the sisters married and moved to different locations around the United States and world.

Yet, eventually, each woman began to let out the darkness that had enveloped their lives. In the journey from violence to healing, one of those steps is telling your story and not having secrets.

“We are only as sick as our darkest secret,” Klassen-Landis said, “and we had despair and fear and grief tucked away in every nook and cranny.”

Klassen-Landis and Klassen only began to share their story when their sister Ruth Andrews, who became involved with Journey of Hope in 1993, encouraged them to join.

Their ability to reconcile anger and pain became stronger the more they had to tell their story. They discovered ties between their experience and those of other murder victim family members whose relationships became restorative.

“The beauty of love is the healing that happens through it,” Klassen-Landis said. “Forgiveness is a way of life that sets us all free.”

Klassen-Landis said she had fantasized that their favorite authors would write her family’s story and make sense of it. She wanted a beginning, a middle and an end.

“When I forgave my mother’s murderer, I was able to find that closure,” she said.

Klassen attributed a part of her healing and capacity to forgive her mother’s murderer to the birth of her children.

Ruth Andrews found some light at the first seminar at which she spoke. A convicted murderer was present in the audience. On a whim, she asked him to pray for her. Immediately, he dropped to his knees and started praying for her out loud. This act helped transform her point of view and begin her passage to forgiveness.

The sisters face the 40th anniversary of their mother’s death without the presence of their father, who died Jan. 31 at age 81. Yet they remember their family by sharing their story.

As Mennonites, the Klassens practiced nonviolence, and even before their mother’s death, the family opposed the death penalty.

“I knew that mom wouldn’t want any violence committed in her name,” Klassen-Landis said.

Journey of Hope gives them a forum to speak out against capital punishment.

Bill Pelke’s testament of witnessing violence and experiencing healing begins, like the Klassens’, with a death.

His grandmother, Ruth Pelke, was 78 when she invited four teenage girls into her home, under the impression they wanted her to teach them a Bible lesson.

Paula Cooper was 15 when she stabbed Ruth Pelke 33 times, and a year later became the youngest female on death row in America.

At first Pelke supported Cooper’s sentence. But he struggled with whether Cooper should die.

Pelke began questioning God. Three things he meditated on changed his perspective. The first was Jesus’ Sermon on the Mount. Second, Pelke remembered Matthew 18 when Peter asked Jesus how often to forgive a sin, seven times? Jesus replied by saying 70 times seven. Last, he envisioned Jesus’ words at the crucifixion: “Father forgive them, for they know not what they do.”

At that point, he remembered Cooper’s grandfather yelling at the sentencing, “You’re going to kill my baby!” He saw the tears on her prison uniform and knew that if he didn’t try to forgive, he would feel guilty whenever he thought about his grandmother.

After forgiving Cooper, Pelke went on a mission to have her life spared. Through his work, she was taken off of death row and sentenced to 60 years in prison.

“Revenge is not the answer. It’s never the answer,” Pelke said. “The answer is love and compassion for all of humanity.”

One comment rejected because writer did not state his/her identity