FROM BILL P.: I feel like I am in the middle of the history of the abolition movement.... 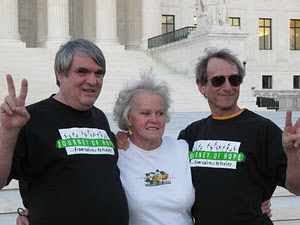 Bill, Marietta and Rick Photo a bit old yet representative of work abolitionists do together in front of buildings representing our US and State Law and Justice Systems.

I feel like I am in the middle of the history of the abolition movement in the United States and around the World.

Yesterday I stood in front of the State Capitol of Texas at the Twelfth Annual March to Abolish the Death Penalty. I saw TWENTY-FIVE human beings who were sentenced to death for a crime they did not commit. Fortunately they were able to prove their innocence before the states that could kill them.

I have heard many of them say, they were not saved because of the sytem, but they were saved in spite of the system.

Folks, the death penalty system is broke and it can`t be fixed. 24 men and one woman testified how they would be dead today, if the states would have had their way.

The "Witness to Innocence" is a non-profit organization for exonerated death row inmates. Their recent events in Texas, a tour throughout major areas in Texas from Houston to Dallas and from the Valley to Austin, sharing their personal stories of what it was like for them and their families to be on death row for a crime they didn`t commit.

Many of the death row exonerees that were present are friends of mine. Shujaa Graham and Juan Melendez are past Journey of Hope…from Violence to Healing board members and participants on many a Journey of Hope tours.

Ray Krone, Delbert Tibbs, Greg Wilhoit, Ron Keine have all been on Journeys.

I have long admired Kurt Bloodsworth and it was good to see him there. Kurt was the FIRST person to be exonerated by DNA evidence.

I also saw my friend Derrick Jamison and it was good to see him and once again hear his powerful voice for abolition.

I met David Keaton, the first exoneree in the growing list of ONE HUNDRED and THIRTY-EIGHT, along with Albert Burrell, Gary Stydl again.

All these men have amazing stories. This year I thought a lot about Randall Dale Adams who was exonerated off Texas’s death row who story became well known through the film “Thin Blue Line”. Randall sadly passed away last year. He is missed by me and the Journey of Hope.

Yes, at least 138 death row exonerees in this country who were sentenced to die, no longer worthy to live in our highly developed society.

When it comes to the deathe penalty there is no room for mistakes. As long as human beings are making the decisions on who lives and who dies there will be mistakes.

I applaud Scott Cobb and his efforts on the Annual March again this year. I have been on quite a few of these but this one held special historical significance.
Never have I seen so many powerful messengers on one stage at the same time.

So thank you, Scott Cobb for having the vision and the determaination to carry this Twelfth Annual March to an historic conclusion. Thank you for drawing the attention of the world to this great moment for abolition. And I am sure "Witness to Innocence" will use this as a springboard for future tours around the country. Members have also toured through Spain with their witness.

As the president of the "Journey of Hope... from Violence to Healing" I declare that we were happy and honored to be part of this historic event, and that our prayers for continued succes in your efforts to rid the world of the scourge called the death penalty.

Thank you Scott and thanks to "Witness to Innocence".

Thanks to Gloria Rubac, Hooman Hedayati, Allison Dieter and others who continually and tirelessly work for abolition in the state of Texas. Your contribution for this march is greatly appreciated. I always feel welcome in Texas when I am with you guys.

"Journey of Hope" board members Randy Gardner and Charity Lee, two of my companions this month in our Uganda Journey of Hope, which turned into the Seattle, Dallas, Uganda, Rwanda, Kenya, Dallas, Austin and San Antonio Journey, were also on the march and rally.

Randy covered his "Journey of Hope" shirt when he put on the orange death row prison jump suit that his, brother Ronnie Lee Gardner wore while on death row in the state of Utah; before he was executed last year, on June 18, 2010.

Randy saw the four bullet holes in his brother`s chest, after he was executed.
Randy, has put a dream to action, in starting a non-profit organization called "Back to Basics Organic Farm and Ranch" in his brothers memory.

Randy took his passion for abolition to Africa and was part of the team in Uganda and Rwanda. You will learn a lot more about Randy when I talk about Africa.

Charity Lee was on the Uganda and Rwanda segments. Charity Lee is founding a non-profit organisation, called the ELLA Foundation. Charity`s beautiful daughter Ella was brutally murdered at the age of four. Not only did Charity lose her daughter, but had the double tragedy of her only son Paris, age 13, committing the murder.

Charity will be publishing her journals, a story that took her to the depths of hell and back. Love helped Charity to survive her cunconceivable journey. I will tell you more about Charity when I talk about Africa or you can go to http://www.theellafoundation.com or CLICK here

Ron Carlson drove with his wife Debbie to Austin to be with the "Journey of Hope" as we honored "Witness to Innocence" and Scott Cobb`s dedication to the movement.
Ron Carlson`s sister Deborah Thornton was murdered by Karla Faye Tucker. After a long journey Ron`s faith called him to forgiveness and he and Karla became friends. Ron held the "Journey of Hope...from Violence to Healing" banner, and walked the entire length despite having sever arthritis and back pain.

Ron had to make the drive to Austin from Houston and get a hotel for the night. He said he did the trip with his wife Debbie because he wanted to suupport me and the "Journey of Hope" as we honored the exonerees.

At one point of the program, after each of the exonerees had spoken, Ron went up and shook the hands of each death row exoneree. To Ron that was a real honor.

Can you imagine what these guys on death row have been going through, for a crime they didn`t commit? It is sad, America, that we said they should be excecuted.
Have there been any innocent people executed?

It was so interesting that as we traveled into the country side of Uganda, that teachers in the primitive schools knew about the Troy Davis case. They know around the world that the state of Georgia, more than likely killed an innocent person.

America, our death penalty system is known as a farce of Justice around world.

But of course; what do we care about what foreigners think?

Genifer Kaye wore Amnesty International`s "I am Troy Davis" T-shirt on the march and helped carry the "Journey of Hope" banner. Genifer is a human rights activist from Dallas, TX and good friends with Rick Halperin, who is a "Journey of Hope" board member.

We met Genifer and Rais Bhuyan during a lay-over in Dallas on our way to Entebbe, Uganda. Rais has been a real instrument for those who wish to rid this world of violence. We met for breakfast at our hotel. It was the second day of this life changing Journey, that began on October 2nd.

We were so happy when she was able to drive down from Dallas to be part of the march. Genifer plays the activist role that is such a big part of the "Journey of Hope".

We are three categories of people at the Journey; murder victim family members, people with death row connections and activists.

It was our great pleasure to support Scott Cobb and the Twelfth Annual March to Abolish the Death Penalty.

It was our great pleasure to support “Witness to Innocence” and encourage their great work.

It was our great pleasure to support the abolition movement in Texas.

I know that we are right in the middle of history for abolition, not only in America but around the World.

NOTE from The Journey Blog:

READERS: for more on the folk Bill mentions, scroll below where we've tried to post everything Bill's sent our way on the recent journey or google The Journey of Hope and the name which interests you. I took the liberty to emphasize some of the numbers Bill mentions by upper-case.

BILL: We are so GLAD you are in the US and are so inspired/energized. We look forward to hearing AS MUCH of your UGANDA JOURNEY (Including Seattle, Dallas, Uganda, Rwanda, Kenya, Dallas, Austin and San Antonio) you are (EACH) willing to share ASAP. (with articles from any and each of these places ASAP and photos too.)

(Not only from Bill but from you, "the other Bill", Charity, Randy, Edward and anyone else who knows about this amazing trip.

What a WONDERFULLY passionate, full and inspiring letter/journal piece from a guy with a HUGE heart. All the best to EACH of you who went on the UGANDA JOURNEY in the days ahead!
Posted by CN at 5:17 PM

Be sure to find various links as you scroll to other UGANDA posts including FB and links to CHARITY's pages and more from ANGELA.