After appearing in the Kerner Show and having a public event in Hamburg the same evening the JOH speakers travelled to Kirchheimbolanden where they spoke in front of 450 students on Thursday afternoon.

Friday was a public holiday in Germany and a day off for the speakers. They used it to do some "power - sight seeing" in Mainz and also had a private concert in a chruch in Kirchheimboldanden - the pipe organ there had been played by Mozart and so they got an idea how his music originally sounded. This instrument was build in something like 1750 and so it's actually older than the US.

Saturday started relaxed. There was a fundraiser downtown Kirchheimboldanden. An organisation called Dollersberger Initiative arranged for a concert on the market place and there was pizza sold and all the money goes to the aid of a little town in Italy which was destroyed by the earthquake last month. This organisation already helped othe villages to rebuild and so we all were really happy to help. 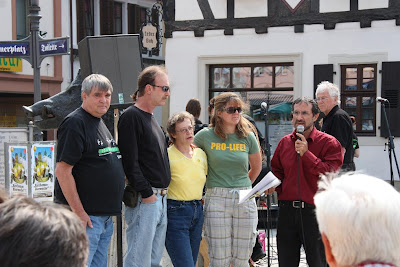 Terri, Bill and Ray being introduced to the public at the fundraising event downtown Kirchheimboldanden 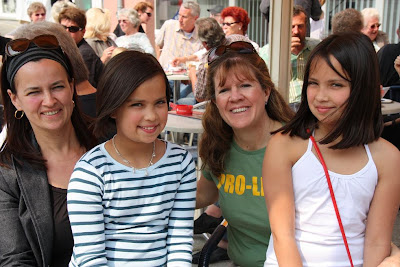 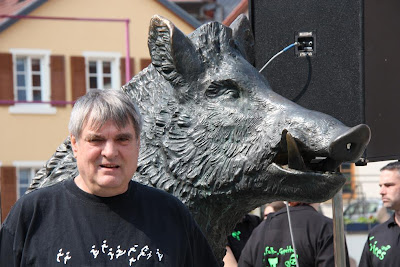 A statue of a wild boar standing downtown Kirchheimboldanden. The wild boar is the town symbol of the city. After seeing the photo Bill was wondering if people are able to recognize who is the boar and who is Bill
Posted by Susanne at 5:47 AM