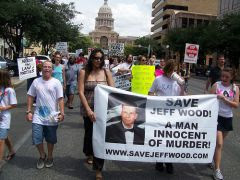 Anti-Death Penalty protesters marching in Austin, Texas to bring attention to the case of Jeff Wood, who is on Texas death row convicted under the Law of Parties for a murder (many reliable human rights groups claim) he did not commit.

2009-05-30 08:26:57 - On June 2, 2009, protests will be held in the U.S, Canada and Europe of the 200th execution under Texas Governor Rick Perry, which is scheduled to take place on that day. Since he became governor of Texas in December 2000, Perry has allowed more executions to proceed than any other governor in U.S. history. Terry Hankins is scheduled to be the 200th person executed under Rick Perry.

The TEXAS ANTI-DEATH PENALTY COMMUNITY asks people around the world to focus attention on Texas and join us in protesting the 200th execution carried out under Rick Perry. Altogether, Texas has executed 438 people since 1982, including 152 under former Texas Governor George W. Bush.

Protest locations include Austin at the Texas Capitol (Organized by Campaign to End the Death Penalty and Texas Moratorium Network), Huntsville, Texas outside The Walls Unit (Organized by Texas Moratorium Network), downtown Houston (Organized by Texas Death Penalty Abolition Movement), Albuquerque, New Mexico (May 30), Montreal Canada, Paris France (June 3), and Leipzig Germany at the U.S. Embassy. Leipzig is a sister city of Houston, Texas. Unless noted, protests will occur on June 2. More protests will be announced as they are confirmed. Some of the locations will include a reading of the names of the people executed under Rick Perry. The Montreal protest will include a "die-in". Times and locations of the protests are available on the website abolishtexasdeathpenalty.ning.com/events.

Perry could have taken a large step to reduce the risk of executing an innocent person if he had supported a moratorium on executions as early as 2001. Now, he may have to answer for the execution of Todd Willingham, who most likely was innocent of the arson/murders for which he was executed in 2004. Most recently, Perry’s threatened veto of a bill in the current legislative session to end the death penalty for people who do not kill anyone but are convicted under the Law of Parties forced legislators to take that provision out of HB 2267.

In Texas, a death penalty case costs an average of $2.3 million, about three times the cost of imprisoning someone in a single cell at the highest security level for 40 years, so it has cost Texas state and local governments $300 million more to seek, obtain and carry out the 200 executions carried out under Rick Perry than it would have cost to seek life in prison in these cases.

1) On the day of the 200th execution, call Governor Perry at 512-462-1782 and tell him your opinion on the death penalty. If you live in the U.S., you can use his form on his website to email him. We suggest you both call him and email him. If you live outside the U.S., you can fax him at (512) 463-1849 or send him a letter in the postal mail. We would like to hand deliver letters to him, so please send your letter to the address below and we will deliver it to Rick Perry: You can send us your letter to Perry for us to deliver whether you live in the U.S. or another country.

2) Attend a protest in your city either on the day of the 200th execution or sometime before. If a protest is not scheduled, you can organize a protest. If you live outside the U.S., organize a protest at the nearest U.S. Embassy or Consulate. Send us a photo or video of your protest by email and we will post it on the website and on YouTube. Or you can upload your photos and videos yourself to our social networking site or directly to our group on YouTube. If your organization is planning a protest, please let us know so that we can list your protest on this site.

3) Sign the petition at www.protest200executions.com/petition.php and add your name to the list of people who are raising their voices to protest the 200th execution under Texas Governor Rick Perry.

4) Visit the website www.protest200executions.com/donate-200-cents.php and donate a symbolic 200 cents towards helping us organize against the Texas death penalty. That is one penny for every execution under Rick Perry. We are asking everyone to donate $2, which is the equivalent of 200 pennies. You are welcome to donate more if you can afford it, but everyone can afford to donate $2.

The artwork at www.protest200executions.com is by German artist Jasmin Hilmer and represents the isolation of Texas in the world community. While most of the rest of the world, including all of Europe, have turned their backs on the use of capital punishment, Texas continues to execute people at a shocking rate.

Houston Protest of the 200th Execution

In Houston, the 200th legal lynching protest will be held from 5:00 until 6:30 under The Old Hanging Tree, corner of Bagby and Capitol downtown. Guest speaker is the borther of Albert Woodfox, one of the Angola Three!
A press conference will be held at 5:00 in Houston. Following the press conference, there will be an open mic so all can register their outrage at another day of infamy for the state of Texas in its quest for executions.

Austin Protest of the 200th Execution at the Texas Capitol


Huntsville Protest of the 200th Execution

Time: June 2, 2009 from 5pm to 6:30pm
Location: The Walls Unit (location of the execution)
Street: 12th Street and Avenue I
City/Town: Huntsville, Texas

There will be a protest of the 200th execution under Governor Rick Perry outside the US Consulate in Leipzig Germany. Leipzig is a sister city of Houston, Texas.
When the old East Germany conducted executions, they held the executions in Leipzig, although at the time it was not widely if at all known.
Time: June 2, 2009 from 5pm to 6pm
Location: U.S. Consulate
Street: Wilhelm-Seyfferth- Straße 4
City/Town: Leipzig, Germany
Organized By: Amnesty International - Leipzig

Protest the 200th Texas Execution under Gov. Rick Perry! Bring your own signs if you have some! We can also stay for the Peace Protest afterwards!
New Mexico recently abolished the death penalty. On May 30, people in New Mexico will hold a protest of the 200th execution under Rick Perry of Texas.
Date and Time: May 30, 2009 from 12pm to 1pm
Location: Albuquerque, New Mexico
Street: Central Ave and Tulane Dr

The DP Coordination Team of Amnesty International Canada Francophone invites the public, organizations and its members to participate in a die-in.

Where : Ste-Catherine St., between Berri and St-Denis Streets (just off Berri-UQAM subway station)

This die-in is held for those wishing to express a strong message in favor of abolishing the death penalty in the State of Texas.

The renactment will represent the 200 executions pronounced by the Governor of Texas, Rick Perry, since the beginning of his governorship in 2001, when he replaced George W. Bush.

We ask people to dress soberly; preferably all dressed in black.
Posted by CN at 9:27 AM