Another Coerced Confession? Victim's Mother Wants to Find Out... 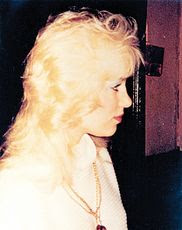 Lois Hall says the wrong man is in prison

Hall recently traveled from her Buffalo home to the Hudson Valley with two wishes: To meet the man convicted in her daughter’s murder and to get answers from Manhattan prosecutors. Manhattan prosecutors have told Lebrew Jones’ lawyers that 21-year-old nail scrapings from murder victim Michaelanne Hall have been found for DNA testing. (photo by John Pertel)

Lois Hall, whose daughter Michaelanne Hall was savagely murdered near Times Square in November 1987, has long suspected police got the wrong man. She felt uneasy that Lebrew Jones — a security guard with an IQ of 68 who had no criminal record — was convicted in her daughter's death.

Twenty years later, having learned more about the investigation and having recently met Jones in Otisville state prison, Hall is convinced that he is innocent and is troubled that Manhattan District Attorney Robert Morgenthau's office has dodged her requests to discuss it.

"Everybody's got to think about whether or not they could have their daughter slaughtered, like my daughter was, and not have a real good answer about who did this," said Hall, who lives in Buffalo.

Jones was convicted of second-degree murder in 1989 for bludgeoning and defiling Michaelanne, a 21-year-old prostitute, at a West 41st Street construction site where he was a security guard. Despite a mountain of physical evidence, nothing connected Jones to the crime, a Times Herald-Record investigation revealed in January. His fate turned on a videotaped statement he made after 20 hours of interrogation without a lawyer.

Jones, now 51 and serving 22 years to life, has always maintained his innocence and is now represented by the Innocence Project and Davis, Polk & Wardwell, a Manhattan law firm.

Hall said she was "thrilled" to hear that Morgenthau's office had reopened the case in February 2007, after the Record raised questions about Jones' guilt.

"When they took that man to jail, I said, 'He didn't do it,'" Hall recalled. "I want some answers on why this man is in jail, with some proof."

The district attorney's office would not comment on the status of its review. But on Wednesday, one of Jones' lawyers said Michaelanne's fingernail scrapings had been found and are available for DNA testing. This would be the first time physical evidence would be tested for DNA.

"Mr. Jones is eager for that testing to be performed, and he will be submitting samples of his own DNA in the testing process," said lawyer Jonathan Martin. "We will be working closely with the Innocence Project to make sure the DNA testing is properly conducted and considered by the DA's office."

A visit with two wishes

Last month, Hall arrived at John F. Kennedy International Airport with only two wishes: to meet her daughter's accused killer and get answers from the district attorney.

One of them came true.

Three days after Hall's arrival, a supervisor escorted her to a private room at the prison, where she would meet Jones for the first time.

"I've been wanting to do this for years," she said while waiting for Jones, "but I didn't know how."

Jones entered the room. Hall and Jones burst into tears and embraced.

"You've been behind bars, too," Jones said, taking a handkerchief from his pocket and wiping his eyes. "I didn't do it. If I was there, I would have stopped it."

They sat down and held hands across the table.

Hall told Jones how she was once wrongfully accused of making a snide remark about a friend.

"She never believed me," Hall said. "I know how hard it is to try to explain it, to get people to believe you."

Jones recalled how one of the detectives, Paul Clermont, said he believed Jones was innocent while booking him at the Manhattan Detention Center.

"He said he would talk to the DA for me, but he never came back," Jones said, shaking his head in bewilderment. "Clermont — he pulled a fast one on me."

Clermont, now living in Mason, Ohio, has washed his hands of the case.

"I'm retired," he said during a brief phone interview last year. "Talk to someone else, because I'm out of it."

Hall wept as she described how Michaelanne was abducted at age 15 by a pimp known as "Cain," who took her to Manhattan and put her on the street, where she was arrested several times.

"Why didn't the police put her on a bus and send her home?" Hall wonders. "If the police had done their job, I'd still have my kid."

Michaelanne turned tricks for six years, occasionally visiting her mother in Buffalo. Once, she had a black eye. She often had bruises.

In October 1987, Michaelanne packed up her belongings and went home, telling Lois she was leaving Cain for good. But she returned to the city and moved into a Times Square hotel. Two weeks later, Michaelanne was dead.

Seeking answers, getting none

Before coming to New York, Hall wrote to Morgenthau's office, requesting a meeting about her daughter's death. She got no response.

"What do they care about little old me?" she shrugged. "I have no power. To them, I'm just a nobody up in Buffalo."

Ford didn't tell Hall that Jones had immediately recanted, saying police fed him details of the crime and showed him photos of the scene.

Ford waited while she read the transcript, Hall said, and then asked if it had changed her mind about Jones' innocence.

"I think she was just there to convince me this guy is guilty," Hall said. "And she really didn't succeed at that. A statement that was probably coerced? I can't look at that and say that's enough."

In 1989, however, it was enough for a jury in New York City, where racial tensions were exploding and random violence was a fact of life. It took them only a half day to find Jones guilty.

Earlier this year, the Record found a witness in Paint Lick, Ky., who might help exonerate Jones.

John Lancaster, who in 1987 worked as a Salvation Army canteen driver in Manhattan, said he and a co-worker, Maj. Betty Baker, spoke with Michaelanne several hours after Jones was alleged to have killed her. Baker, a defense witness, said the same thing at trial.

"He said he's still got doubts; he was trying to close the case in his own mind," Lancaster said.

At Jones' sentencing, O'Donoghue told the judge Lancaster didn't remember that night. Lancaster disagrees, saying he told the prosecutor he and Baker spoke to Michaelanne, who was terrified of her pimp.

"She was scared that night, scared to death," Lancaster said. "She said, 'He's gonna kill me.'"

O'Donoghue, who retired from the district attorney's office, has a private practice in Huntington.

"I don't recall that," he said in a phone interview earlier this year.

Unless he is exonerated, Jones' first parole hearing will be next year.

"Be strong; my heart is with you," Jones told Hall as they wrapped up the visit.

He paused and looked into Hall's eyes.

"I didn't do it," he said again, choking up. "I'm doing somebody else's time right now. Who? Only God knows that."

cyoung@th-record.com
Posted by CN at 6:37 PM