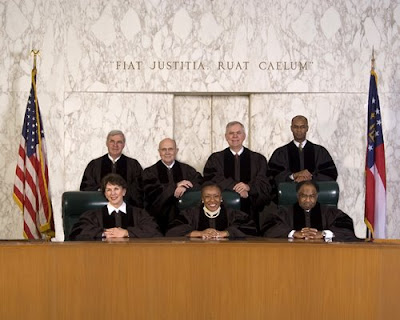 Georgia Supreme Court Chief Justice Leah Ward Sears recently wrote, "I believe … it's time to examine whether Georgia's current method of enforcing the death penalty and its attending consequences are compatible with the dignity, morality, and decency of society's enlightened consciousness, and is reflective of a humane system of justice." (Doesn't this statement aptly stand for everyplace anywhere which still uses the death penalty no matter what?)

Chief Justice Leah Ward Sears has achieved a distinguished position in Georgia's history. She was the first African-American woman to serve as Superior Court Judge in Georgia. When appointed by the Governor of Georgia in February, 1992, she was the first woman and the youngest person ever to serve on Georgia's Supreme Court. Also, in retaining her appointed position as a Supreme Court Justice, Justice Sears became the first woman to win a contested state-wide election in Georgia.

She advocates for family programs.

Justice Sears' professional and civil affiliations are varied and numerous. The Justice is past Chair of the American Bar Association's Board of Elections. She is also the immediate past Chair of the Judicial Section of the Atlanta Bar Association, and she also served as Chair of the Atlanta Bar's Minority Clerkship Program. Justice Sears founded and served as the first president of the Georgia Association of Black Women Attorneys. Chief Justice Sears serves on the Board of Directors of the Morehouse School of Medicine Center for Child Abuse & Neglect, the Board of Visitors of Mercer Law School, the Sadie G. Mays Nursing Home, the Georgia Chapter of the National Council of Christians and Jews, and she is a board member for Mission New Hope, a metropolitan Atlanta area substance abuse coalition. Justice Sears serves on the Cornell University Women's Council, the steering Committee for Georgia Women's History Month, and the Children's Defense Fund's Black Community Crusade for Children. In addition, Chief Justice Sears founded the Battered Women's Project in Columbus, Georgia.
Posted by CN at 6:17 AM